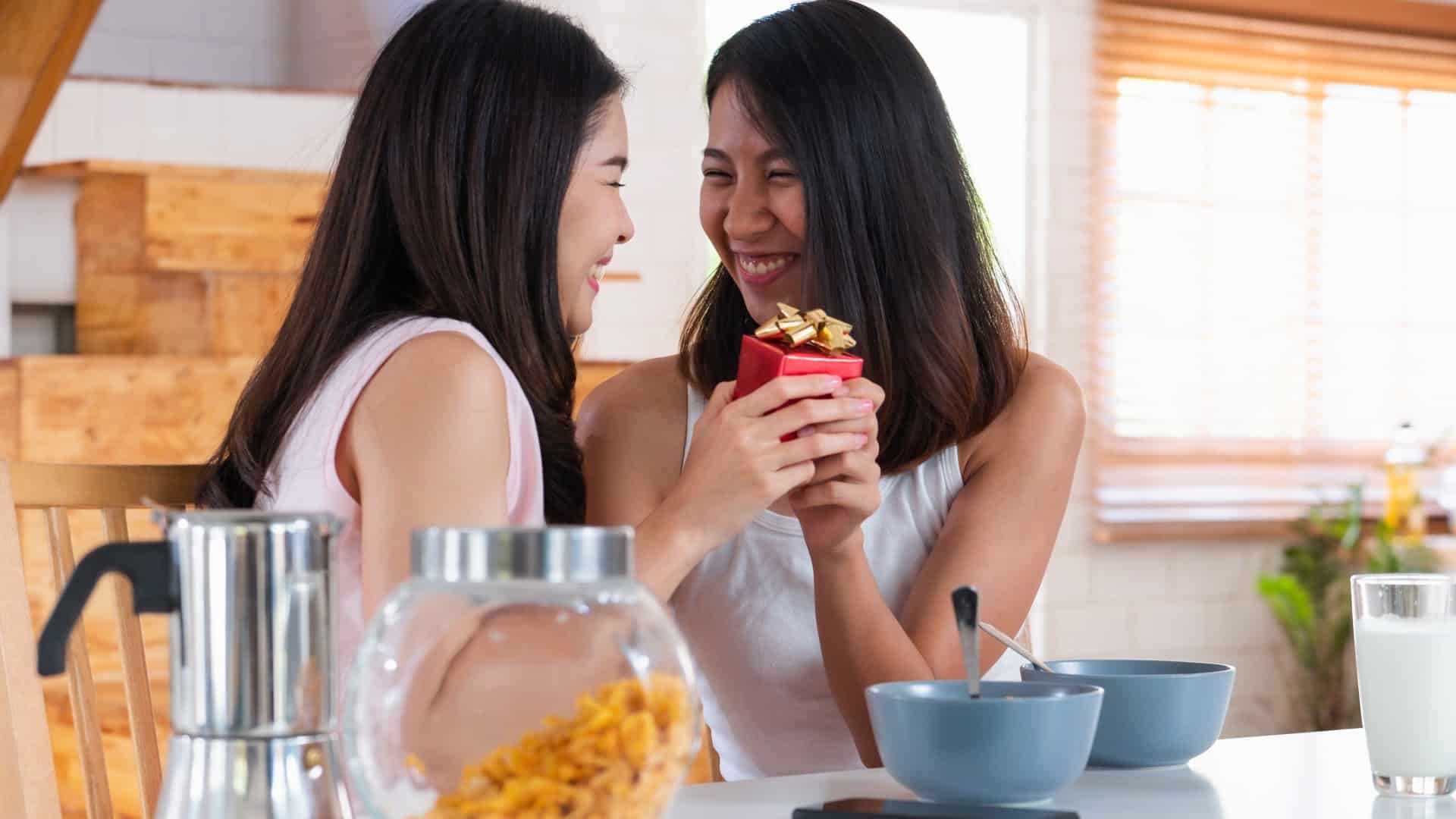 Whether you’re searching for anniversary gifts for gay and lesbian couples to celebrate their very first year together or their 60th, we’ve got you covered! Over the last few weeks, we assembled amazing gift guides for every single year from one to 60. Now, we’re bringing it all together for you in one spot. Take a look!

As mentioned above, we shared ideas for the first 6 decades of marriage. The huge milestones- like 10th, 20th, 50th, and 60 earned a starring role in their very own gift guides.

FYI, this post contains affiliate links. If you make a purchase through these links, we earn a small commission at no extra charge to you.

The first anniversary is all about paper- or clocks if you prefer modern themes. If you think there aren’t many gift-worthy paper products, think again! Check out these 10 Meaningful First Anniversary Gifts For Gay Couples!

From the second year to the ninth we have a lot of different themes, colors, and gemstones, from leather to wool and aluminum. Use the table below to see the themes for each year. Then check out our favorite Anniversary Gifts for Gay & Lesbian Couples for Years 1-9

The 10th anniversary is represented by aluminum, diamond jewelry, daffodils, and the color blue. With this in mind, we can think of incredible keychains, wallet inserts, or even complex star maps. Check out some amazing 10th Anniversary Gifts For Lesbian and Gay Couples!

From the 11th to the 19th year we have a lot of different elements, such as home décor, crystal, porcelain, and bronze, and the selection of gifts can seem a little overwhelming.

Be without fear though, because we covered everything in our guide to the best Anniversary Gifts for Gay & Lesbian Couples for Years 11-19.

Another big milestone surrounded by platinum, emeralds, and daylilies is the 20th anniversary, which has to be really special. You can think of gifts such as teapot sets and platinum-dipped roses, or you can simply check out Amazing 20th Anniversary Gifts for Same-Sex Couples, where you’ll find everything you need.

Through the years 21 to 29, we encounter a lot of magical elements, from copper, opal, silver, and sculptures, all the way to photos and furniture. I know, it can be a little overwhelming to find the thing you need, but we prepared everything for in our  Anniversary Gifts for Gay & Lesbian Couples for Years 21 to 29 guide.

Once you hit the 30th year, things start getting a little tricky. You’ll only find specific themes for 5-year milestones. For the 30th year, look to diamonds, pearls and the color green. For the 35th anniversary, we’re talking jade and coral,

For other years, we had to be a little creative! We came up with 10 Amazing Anniversary Gifts For LGBTQ Couples for Years 30 to 39!

As the years go by, we got more and more excited about the anniversaries, and for good reason. We’re coming up on a massive milestone!

For the 40th to 49th anniversaries, you may want to think about ruby, sapphire, and the colors red and blue when you prepare the gifts. Again, though, only the 0s and 5s have themes (40 and 45). Check out our top 10 Clever Anniversary Gifts For Gay And Lesbian Couples for Years 40 to 49!

The 50th anniversary is one of the most special ones, and it’s all about gold, in all its shapes. Of course, most gifts can seem a little pricier or not good enough, but we put together an article with the best possible gifts for this occasion! So, don’t miss our 10 favorite 50th anniversary gifts for same-sex couples!

During these nine years, the theme is gold (just like the 50th), so the presents have to match the theme. There are many options to choose from that aren’t super pricey! We have a lot of cute suggestions for you! Check out 10 Sweet Anniversary Gifts For Gay and Lesbian Couples for Years 51 to 59 !

The 60th anniversary is the ultimate milestone, and it needs to be properly celebrated. The theme is diamond, and it’s probably the fanciest thing in the world. You will find here everything you need in order to choose the best 60th-anniversary gifts for same-sex couples in our guide!

There is a huge journey from the 1st to the 60th anniversary, but you know what? It’s the best time anyone could ever ask for. These anniversary gifts for gay and lesbian couples will definitely help you choose something amazing, and we couldn’t be happier about it

What are your favorite anniversary gifts for gay and lesbian couples? Share below!

10 Epic Virtual Bachelorette Party Games for the Best Night Ever

How To Throw A Virtual Bachelorette Party: Complete Guide