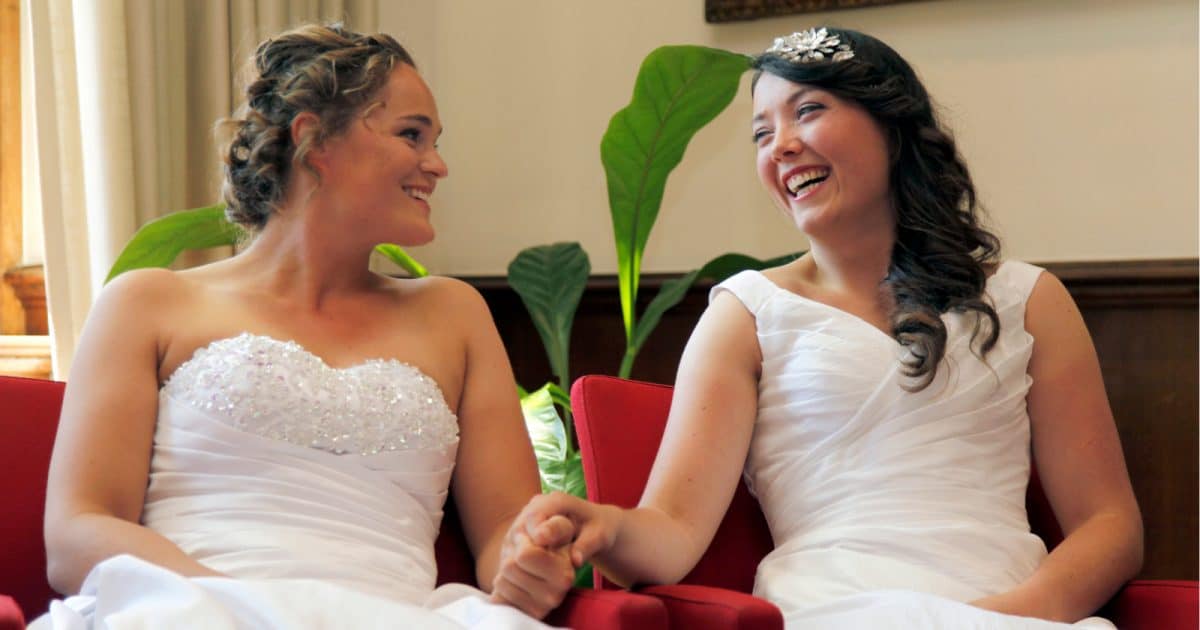 If you’re heading to your very first same-sex wedding, you may have quite a few questions regarding proper etiquette, attire, and salutations. Overall, an a gay or lesbian wedding isn’t much different than an opposite-sex affair. It all boils down to the one thing; two people who are very much in love tying the knot that joins their lives together as one.

While it is true that an LGBTQ wedding is pretty similar to an opposite-sex wedding, there are a few differences. These don’t really have anything to do with the fact that the couple is the same gender, but more to do with the couple’s preferences. So, let’s go over some of the things to expect as a guest at your first same-sex ceremony and reception, FAQ-style.

What to Expect at Your First Same-Sex Wedding

“Basically, a gay wedding is just like a straight wedding.”

For those of you who don’t know where this line is from, it is from Comedy Central’s sketch comedy television series- Key and Peele- starring Keegan-Michael Key and Jordan Peele. In Season 4, Episode 1, there’s a sketch titled- Gay Wedding Advice, where Peele plays Larry Johnson, whose cousin Delroy is getting married to a man and his family has questions about what the wedding will be like.

In the sketch, Key plays Gary, Larry’s co-worker, who is a gay man, trying to debunk the family’s myths about gay weddings. The family asks questions like “Is RuPaul going to be there?” and “When do we sing Over the Rainbow?” If you haven’t seen it, check it out here on YouTube.

Obviously, since it SNL, it’s an over-the-top version of frequently asked questions for guests attending their first same-sex wedding. Keep reading for our serious answers to all of your biggest questions.

How Do I Address the Pre-Wedding Couple?

As a guest at a same-sex wedding, it can be tough to know the correct way to address the couple. The answer is that you’ll want to use the couple’s preferred terminology. Some same-sex couples don’t like using gendered terms like bride and groom but prefer to use more neutral terms like partners for life or spouses to be.

Co-ed wedding showers, or couple’s showers are popular with same-sex couples, with both partners in attendance. Bachelor and bachelorette parties will likely be separate parties if the couple has separate groups of friends and a joint party if the friend groups are merged. Bach Party is the gender-neutral term for a bachelor or a bachelorette party.

Who Walks the Bride Down the Aisle?

One important thing to remember here is that you need to forget the traditional male-female roles at opposite-sex weddings. Traditionally, the bride walks down the aisle, with her father, while the groom waits for her at the altar. Obviously, this scenario might not work for a same-sex couple.  So, how does it work? It totally depends on what the couple wants.

Generally, wedding with two brides may have one bride who walks down the aisle, escorted by a family member (or close friend) or solo. Another option for two brides is both of them will walk down the aisle, either together or separately. For weddings with two grooms, you’ll likely see them both enter the ceremony, simultaneously, from either side of the altar and meet at the altar.

What Type of Wedding Attire Does the Couple Wear?

Honestly, the combinations are endless. The more important question is “what do I wear to a same-sex wedding.” That answer is almost always on the invitation. If it’s not, simply call up someone in the wedding party (or the couple themselves, if you’re close) and ask, “Hey, what’s the attire code? Should I pull out my ball gown for a formal affair, or is it more casual?”

What Are Members of the Wedding Party Called?

Well, that completely depends on the couple. The most common terms are Man-of-Honor, Best Woman, Bridesmen or Groomswomen. Some couples will choose to use completely genderless terms, such as Attendants.

Will the Ceremony Readings Be Different?

Like opposite-sex weddings, it all depends on the couple’s preferences. If it’s a religious ceremony, they may include readings from the Bible.

What Sort Of Wedding Traditions Are Added or Omitted?

Traditions that are based on gender roles, like the bouquet toss and the garter toss, are often excluded in a same-sex wedding. Not always, mind you. Sometimes, couples choose to throw the bouquet together, or throw separate ones.

However, you may see some fun and interesting wedding themes that you likely haven’t seen before like Rainbow Colors, Brokeback Mountain, Glee or RuPaul’s Drag Race. Of course, you may not. Again, it depends on personal preferences.  Not every LGBTQ couple wants a riot of rainbows everywhere on their big day.

Will There Still Be a First Dance for the Couple?

Yes, of course! Some couples choose a song that reflects their relationship or a song that’s a personally favorite of the couple. Other couples will choose a gender-neutral song, one that doesn’t refer to either sex, but to people in general, such as “Come Away With Me” by Norah Jones, “Halo” by Beyoncé or “I’m Yours” by Jason Mraz. While other couples will choose a modern love song that is written by a LGBT artist, like “She Keeps Me Warm” by Mary Lambert or “So Beautiful” by Darren Hayes.

One last thing to remember- the couple invited you because the treasure you as a friend or family member, and they want you to be a part of their momentous occasion. While you should take the extra steps to learn and respect their preferences, they aren’t going to disown you if unknowingly refer to them as “wife and wife” or “groom and groom” when they prefer “soulmates” or “spouses.”

Bottom line, every wedding is unique, so whether it’s your first same-sex wedding or your 50th, the answers to these questions will vary. Take your cue from the couple and those closest to them.

Do you have any other questions about what to expect at your first same-sex wedding? How about any tips to share? Tell us below!

Groom Said Renting a Wedding Arbor is “Stupid Expensive,” So He Made His Own (Here’s How!)