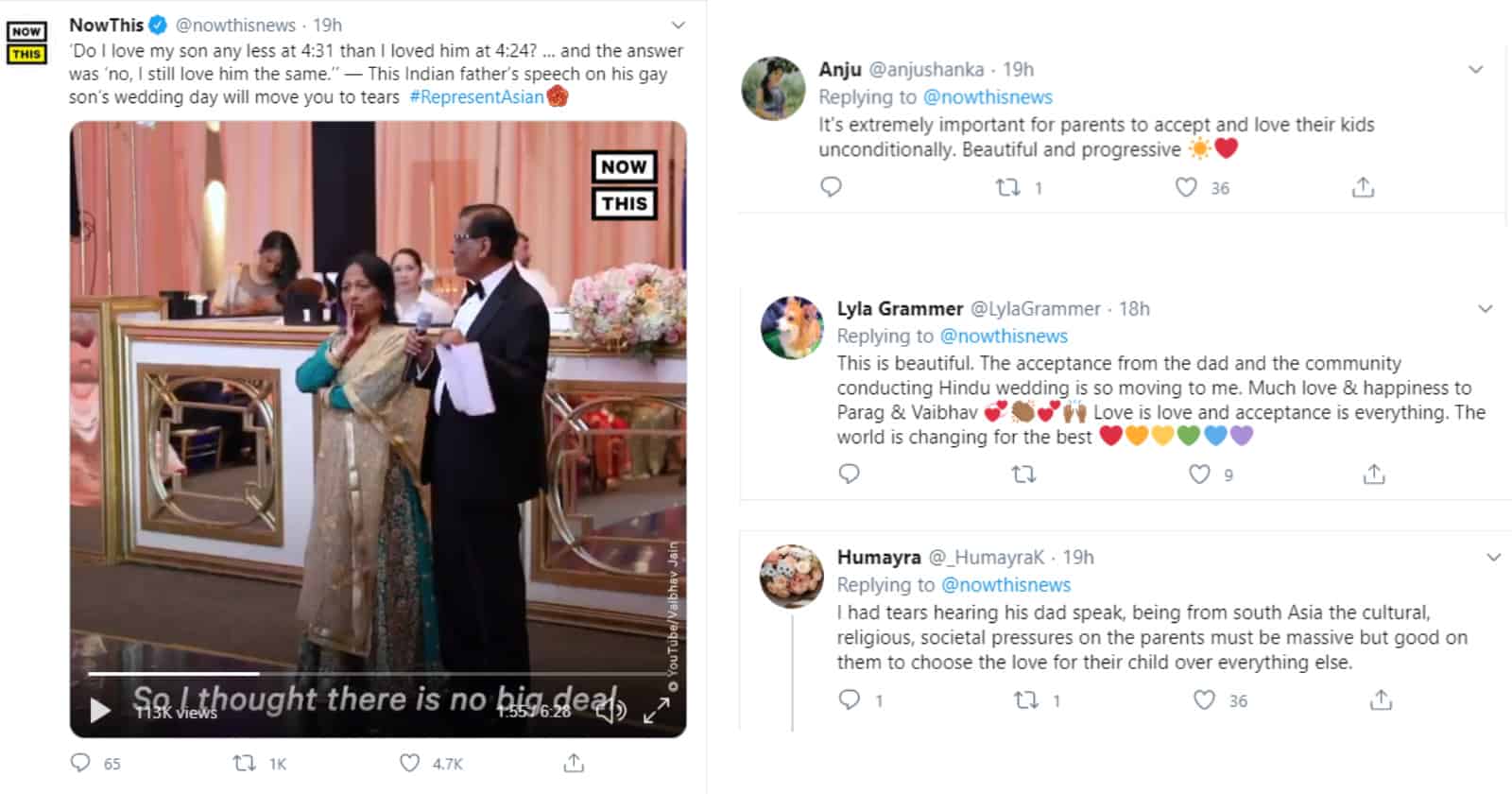 A father’s beautiful speech at his gay son’s wedding has gone viral on Twitter and is moving everyone to tears right now.

Table of Contents: hide
1) This Father’s Speech an His Gay Son’s Wedding Day Will Move You To Tears
2) A Very Emotional Speech
3) “Gay People Is Not A Disease, It Is Not A Defect, It Is Not To Be Cured”
4) The responses to Mehta’s speech are overwhelmingly positive

This is exactly the kind of positive news the world needs.

Read on for the heartwarming story.

An father’s speech at his gay son’s wedding is the thing shaking the internet right now.

Dr. Vijav A. Mehta, a self-confessed “very homophobic person,” managed to find the reason to support his son’s decision of marrying another man.

Parag Mehta and Vaibhav Jain got married in 2019, and their wedding was truly special for everyone.

They met back in 2012 at the D.C. Pride Parade, and did everything they could to find each other after.

I remember the day that I met Vaibhav, although I don’t remember it the way he does because I was dancing in the Pride Parade. It wasn’t until a couple of days later when I got a ‘poke’ on Facebook. Who pokes on Facebook?

And I think there was a moment that we shared where he came and danced with me, and it was just… I was mesmerized. I was like, who is this guy? I need to find out who he is.

Now, the years have passed, and they celebrated their wedding in a very emotional way. Before the video starts, Mehta says.

Well, he did share quite a lot, but more about how he learned to be accepting of his son’s sexuality.

Dr. Vijav A. Mehta started his speech by saying.

What comes next is probably the most emotional thing you’ll ever see, as Mehta describes the night he learned his son was gay.

“Dad and mom, I’m gay. I have known it since I was 10 years old. I thought I was confused but I’m beginning to realize that I am gay. I thought I will hide my being gay until you die so you won’t be embarrassed. I tried to commit suicide while I was in the high-school, but I did not succeed” thank God for that.

“But last week, I was discussing in the class, and there was another Indian girl, and I blurted out” I’m gay”, so I knew the news will come to you sooner or later. Therefore, I’m telling you I’m gay.

The whole thing was like a three-minute speech. From the best of the time our life went to the worst of the time. I was a very homophobic person, there’s no question about it. So I thought there is no big deal. I’ll fix him, I’ll find the best treatment in the country. I’ll find the cure for it, and I’ll handle it.

Monday morning, I was the first person to enter the medical library. And I pulled out all the cumulus medicus. And then I suddenly realized in 30 minutes that American Psychological Association back in 1973 had declared that gay people is not a disease, it is not a defect, it is not to be cured, it is not contagious, and if you accept somebody who’s gay, your child is not likely to be more gay than otherwise.

I asked a simple question: “Do I love my son any less at 4:31 than I loved him at 4:24?” And a long pause, and the answer was “No, I still love him the same.” So then I wrote the letter, this is what I did. I said “Who will be the 50 people who have played the important role in Parag’s life?”

Some of them will were very Conservative, and I knew that they will freak out when they heard it. So I kind of thought, “Ok, maybe 50% of the people would not talk to me, and my life would really be isolated.

What to do?” Again, a few minutes later, the answer came very simple. I said “Vijay, if there are 50% of the people who don’t want to talk to you, maybe they don’t need to be in your life. Why don’t you stick with the other 50% who will want to be with you?”

The responses to Mehta’s speech are overwhelmingly positive

While there are, sadly, always people who have nothing but negative and bigoted things to say, most are replying with heartfelt messages.

Th speech moved people to tears. Especially those from South Asia who understand the societal pressures of being gay, or parenting a gay child.

Others expressed how important it is for parents to love their kids unconditionally.

Still others pointed out how the word gay is Taboo in certain parts of the world, and how speeches like this help to change that.

It’s wonderful to see someone who described himself as a “true homophobic” realizing that being gay isn’t something to cure, nor is it a reason to love your child any less.

What do you think about this father’s speech at his gay son’s wedding? Share below.