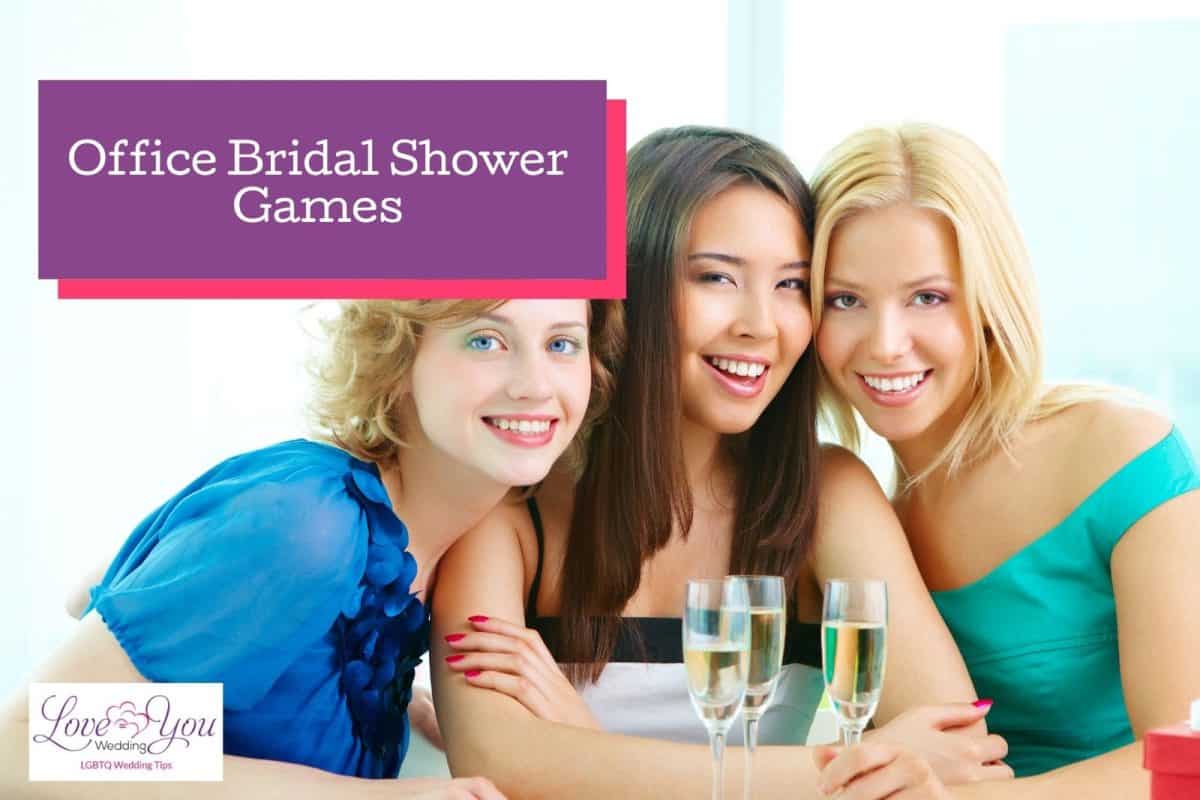 If you’re looking for some amazing office bridal shower games, I’ve got you covered! I’ve come up with some activities that are big on fun but low on the mess and noise factor. Let’s jump right in and check them out!

Office bridal showers are a lot different than your average weekend shower at someone’s home. You can’t really make a huge mess for one thing. Plus, you need to be considerate of other employees who aren’t attending. Last, but far from least, you have to squeeze the whole shebang into one short lunch hour.

So as far as games go, simple is better! That’s where these ideas come in super handy!

FYI, this post contains affiliate links. We earn a commission if you make a purchase at no extra cost to you.

For this low-mess game, all you need is a bag and some random little objects, such as a toothbrush, lipstick, or paperclips. Throw everything inside.

Then, pass the bag around, giving each player one minute to feel around and try to figure out what’s inside. Grab this cute rustic printable for them to keep track of what they find, or even just use a piece of copy paper. 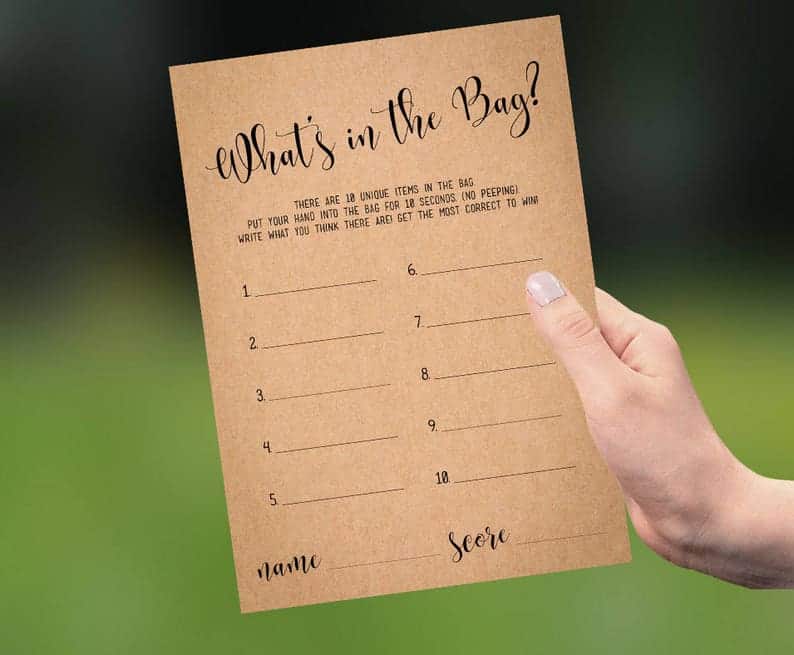 Please note - this is digital Whats in the Bag game cards PDF and JPEG files download only, no physical product comes with it.

Who Am I is one of my favorite office bridal shower games because it has the potential to be either super funny or absolutely heartwarming. Playing is simple. Each guest writes down a cherished memory with the bride-to-be. Then, you collect them and read them out loud and the bride has to guess who said it.

Again, you can use regular old paper for this, but I like to choose a pretty printable (like this lemon-themed one). After the party, I like to add the memories to a scrapbook for my bride pal. 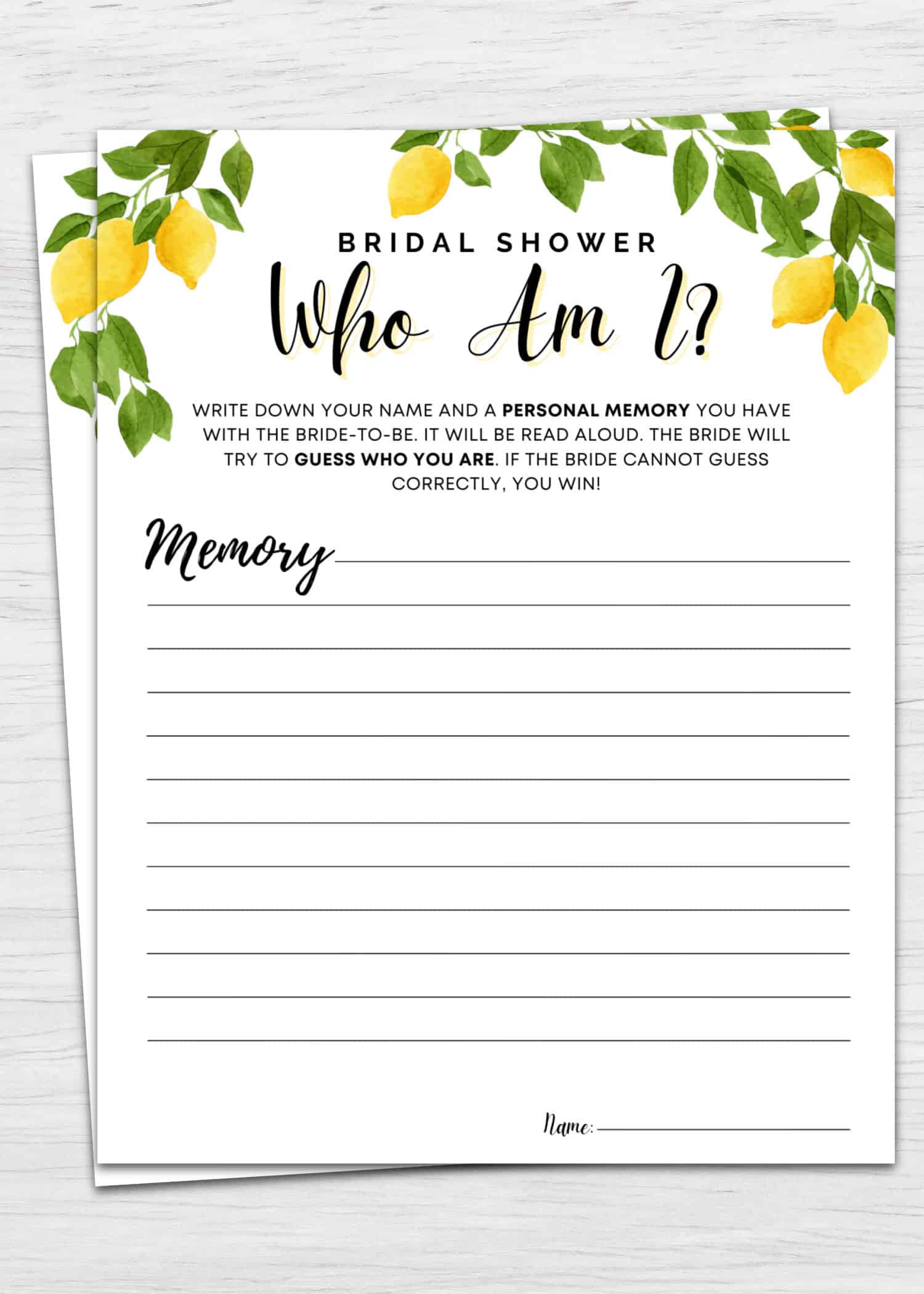 Lemon-Themed Who Am I Bridal Shower Game

This game is the test of memory and acting skills. Two teams are formed by writing the titles of wedding films on cards and distributing them to guests.

Players specify titles to their teammates, who have three minutes or less to guess the exact name. This game is perfect for an office bridal shower because you literally need nothing other than your own bodies and a few scraps of paper to write the clues on.

Learn how to play the toilet paper bridal shower game!

You can never go wrong with a good old-fashioned word scramble! Basically, it’s just a worksheet-style game, so it’s easily played right at your desks.

I prefer to buy printables with the words already jumbled, but as with all of these games, you could just as easily make your own. “Bouquet,” “Bride,” “Cake, Bridesmaids, Husband, and Honeymoon” are just a few of the wedding-related words that can be jumbled. 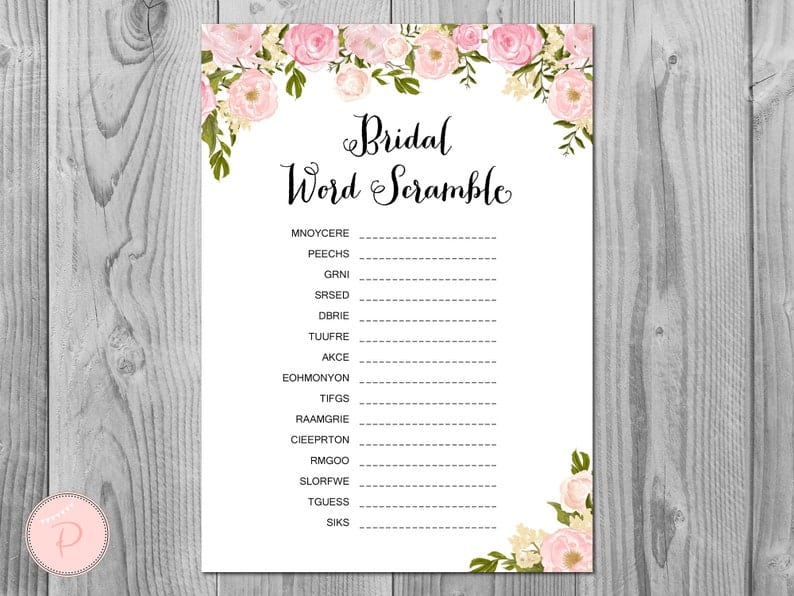 Let’s check the drawing skills of guests. It will be great fun. Divide the visitors into pairs for organizing a lively game of Pictionary.

Each team writes words on paper slips, and the opposing team draws the word and asks their teammates to guess it. All terms must be related to the wedding.

Everyone loves bingo, and it’s one of the easiest games to play in the office break room. Just grab our cute bingo printable with 20 unique cards and some markers to use as daubers.

For a quick game, play it the traditional way: the first person to get five in a row wins. If you’re planning a longer shower or just want one game, you can get fancier with it. Maybe make it so that the first person to cover the entire card wins, or even come up with clever patterns. 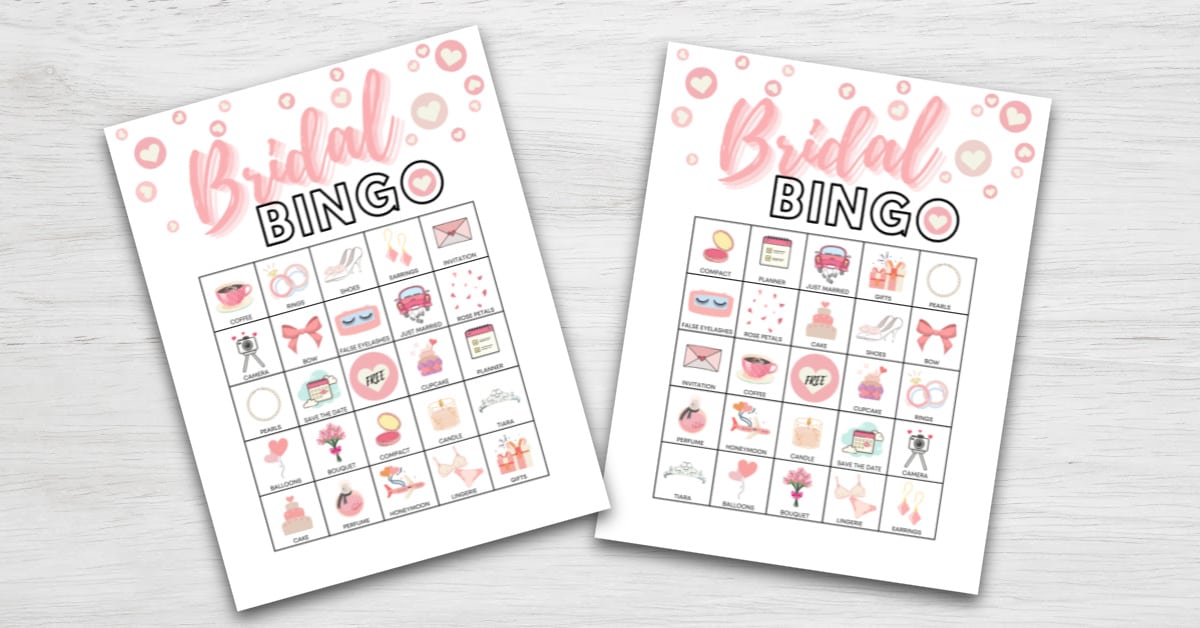 PDF with a white background (8.5x11) that includes:

This is a cute and melodious game. On a blank sheet of paper, each guest writes one romantic line for the newlyweds. Fold over a sheet of paper and pass it on, asking another guest to do the same.

Make your way through all attendees before reading the (disjointed) poems that participants have penned in tribute to the brides’ incredible love. Then the bride reads or sings the poem in front of everyone.

One of my favorite games to play at a bridal shower is the toilet paper bridal shower game, but it’s a bit too messy for an office. So a wedding dress drawing competition is the next best thing!

Print out paper dolls (Education.com has a ton of them) and hand out pens, pencils, crayons or markers in different colors. Set a time limit, then let your guests get creative! Their only goal: draw the most unique wedding dress.

For this one, just load up a playlist with a bunch of really great romantic wedding songs. Play songs one at a time, stopping when someone guesses the tune. Keep track of correct guesses, the one with the most wins!

Check out the video below for a ready-to-play version:

I mentioned some things to consider earlier, but let’s go over a few more tips for following good office party etiquette [1].

Yes, typically it’s held at the office during work hours. This is a chance for co-workers who may not be invited to the wedding itself to celebrate with the bride. 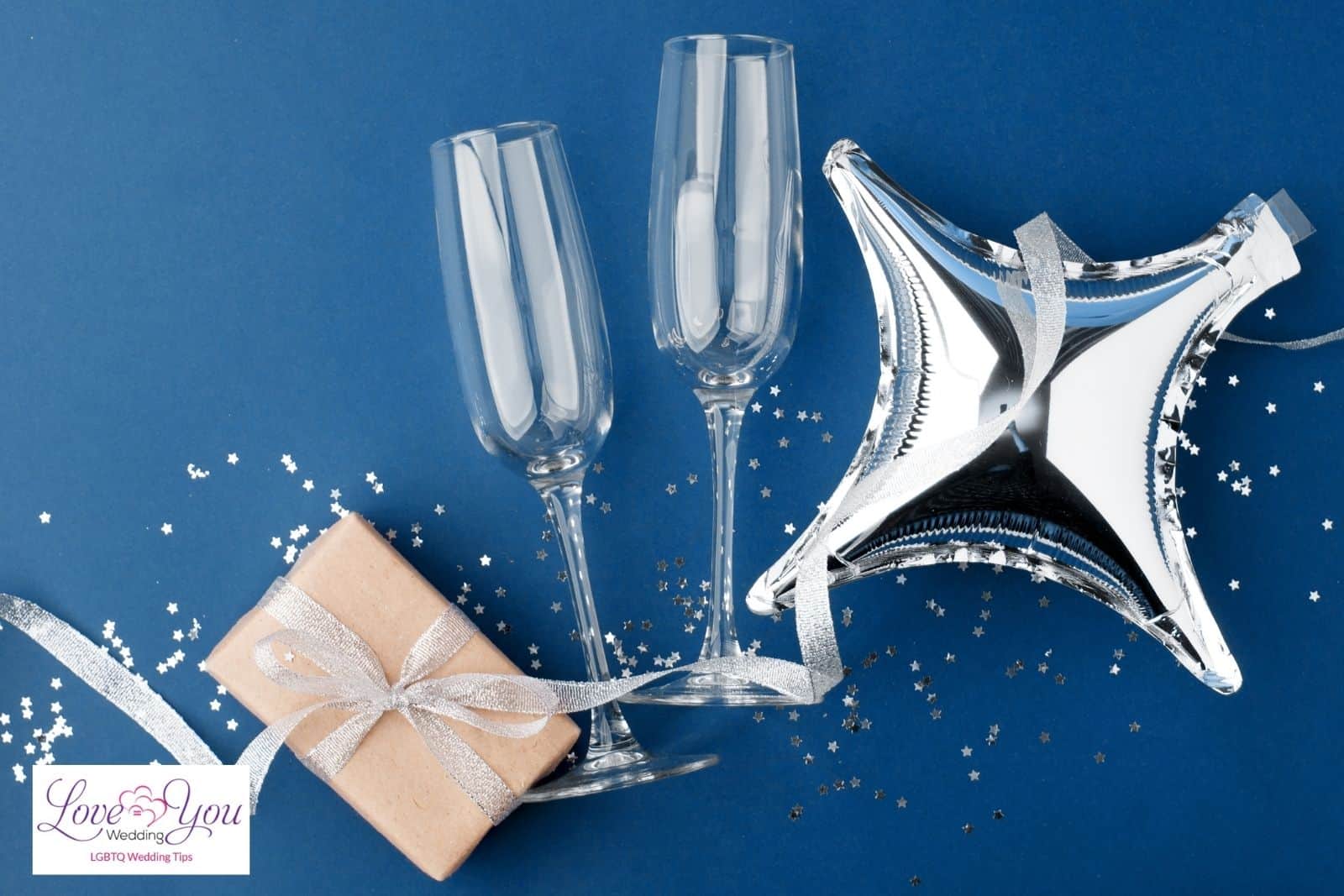 Who arranges bridal showers at an office?

Bridesmaids are often expected to organize a bridal shower for the bride, but with an office shower, the duty typically falls either on the bride’s closest work friend or even human resources. 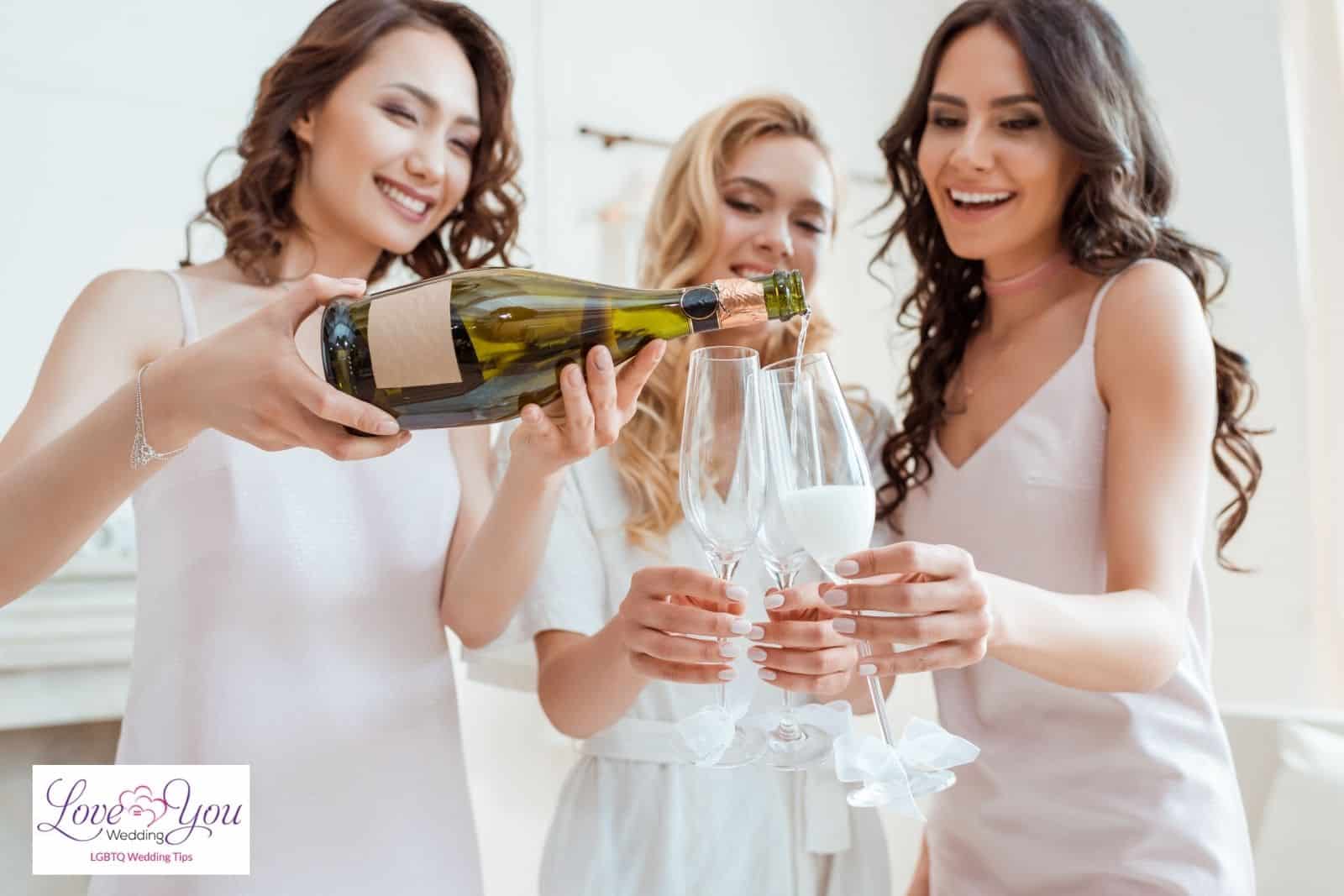 An office wedding shower is a lovely occasion for co-workers to share in the excitement, even if they weren’t invited to the actual wedding. Just use common sense and plan activities that won’t leave behind a big mess, and you’ll have a wonderful time!

What are your favorite office bridal shower games? Let us know in the comments below!

How to Plan a Lemon-Themed Bridal Shower Party