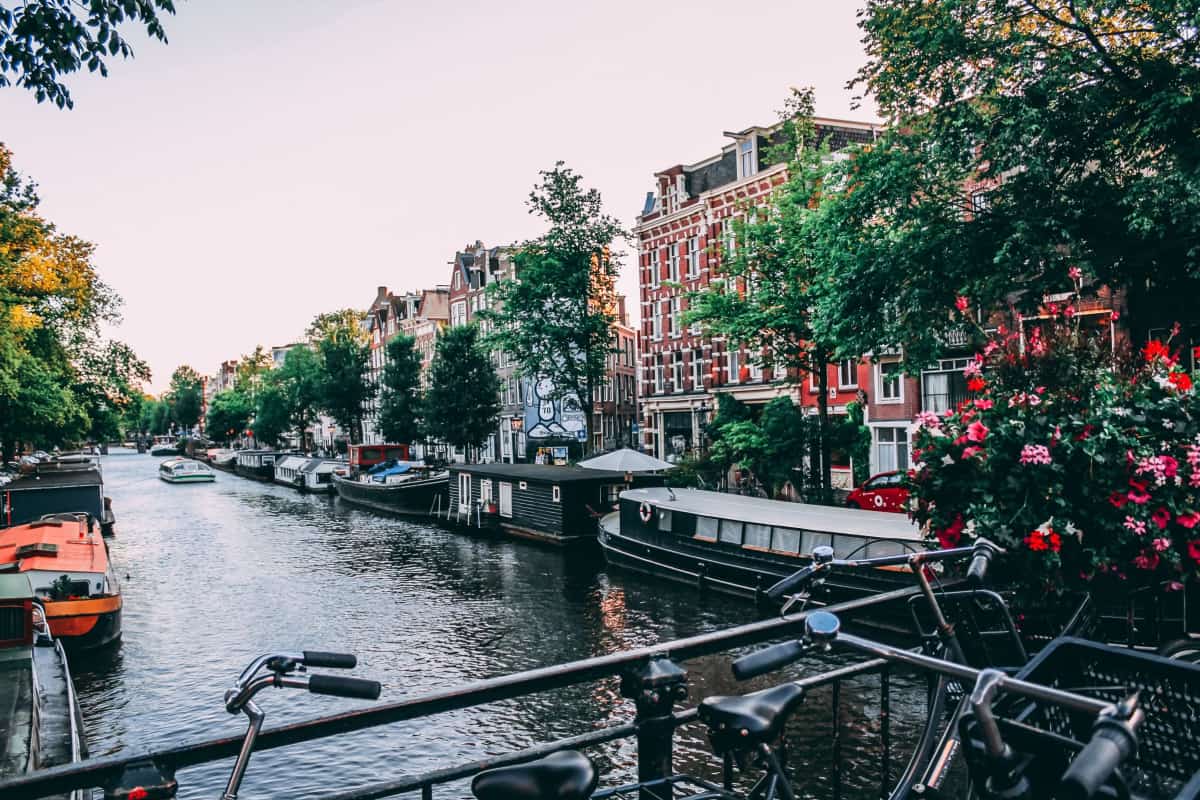 Looking for the hands-down best of the best LGBT honeymoon destinations around the world? Get ready to pack your bags because we’ve got you covered!

Forget those long list filled with so-so places; we’ve narrowed down the choices to just five places that we’d visit in a heartbeat. We’ll also give you hotel, restaurant, and attraction recommendations for each place.

Want to stay closer to home? Check out these Best LGBT Honeymoon Spots in the US & Canada

According to Trip Savvy, 57% of same-sex couples take a honeymoon after their wedding.

If you’re one of those 57%, you’re probably wondering where the best places to go are, right?

Well, look no further! Here are some of the best honeymoon destinations around the world

Located in the province of North Holland, Amsterdam is the capital and most populated city in the Netherlands, with a 2019 population of 1,140,339.

The George Breitner Suite, named after the famous Dutch painter and photographer,provides a panoramic view of Oosterpark and the Tropenmuseum, an ethnographic museum and one of Amsterdam’s largest museum, with a collection of approximately 366,500 items.

The Isaac Israels Suite, named after the famous Dutch painter, features a private terrace surrounded by flowers, fruit trees and a small pond.

Located in the heart of the city, Café de Jaren is an airy, bright, spacious café and one of Amsterdam’s largest cafes.

Featuring a casual menu of European and Dutch cuisine, the café has a patio and balcony that overlooks the Amstel River.

The Van Gogh Museum is a Dutch art museum that showcases the works of Vincent Van Gogh, one of the world’s most notable post-impressionist painters.

Bora Bora is a small South Pacific island, part of the Leeward Islands, in French Polynesia. As of 2017, Bora Bora had a population of 10,605.

Located on the Motu Toopua Lagoon, the Conrad Bora Bora Nui is a luxury beach resort, situated on a private cove with black lava rock and white sand.

The resort features 114 suites and villas, as well as 3 restaurants and 3 hotel bars.

Bloody Mary’s Restaurant is an iconic bar, restaurant and yacht club all in one.

Often visited by famous actors/actresses and musicians, the restaurant is famous for their fresh seafood dishes, including their Ahi Red Tuna Sashimi.

Open since 1979, the restaurant features a dining area that is situated on the water, with the sand as its floor.

You can choose to take half-day or full-day tours. You can choose an air tour like the Sightseeing Flight Over Bora Bora and the Island of Tupai.

Another choice would be a jet ski tour such as the Half-Day Bora Bora Jet Ski Tour.

A third choice could be a lagoon tour like the Bora Bora Snorkeling Tour with Sharks and Stingrays. A final choice may be a land tour such as the Bora Bora 4WM Tour.

Cape Town is a port city that is located on South Africa’s southwest coast. Cape Town, South Africa’s legislative capital, has a 2019 population of 4,524.111.

The hotel features 17 rooms/suites/apartments, decorated in African and European flair, each one with its own character.

Breakfast is served each morning, in the courtyard, under South Africa’s oldest known fruit-bearing grapevine.

Located in the De Waterkant district, one that is popular among the LGBT community, Café Manhattan is a casual café, restaurant and bar all rolled into one.

With a wrap-around shady terrace outside, the interior décor is like industrial chic meets The Wild West.

Paris is the capital and most populated city in France, with a 2019 population of 10,985.187. It is also a global center for art, cuisine, culture and fashion.

Hotel Duo is located in the Le Marais historic neighborhood of Paris. The neighborhood has been a center for LGBT culture since the early 1980s, with an abundance of LGBT bars and restaurants.

The hotel has 58 rooms and suites, as well as a contemporary lounge bar, a fitness center with sauna and a patio with vertical garden.

Located in Paris’ iconic Latin Quarter neighborhood, Hugo & Co is a contemporary French bistro that opened in the spring of 2018.

The bistro is the brainchild of Chef Tomy Gousset, who also owns Tomy & Co in the Gros Caillou District.

Situated along the Right Bank of the Seine River, the Louvre Museum is the largest art museum in the world, with a total collection of approximately 460,000 pieces currently being stored at the museum.

However, there are only about 38,000 antiquities, decorative arts, drawings and prints, paintings, sculptures and statues, on display at the museum.

Puerto Vallarta is a beach resort town on Mexico’s Pacific Coast. The town has a 2019 population of 203,342.

Located on a sandy beach along Banderas Bay, Krystal Puerto Vallarta Hotel is just 3 miles from the Malecon Boardwalk. The hotel features rooms with your choice of one with views of their Estandar Garden or one with views of the Pacific Ocean. Also at the hotel are 5 restaurants, a terrace lounge, a beach bar/grill, 3 outdoor pools, a fitness center and a spa.

Located in Mexico’s state of Jalisco, Puerto Vallarta, Joe Jack’s Fish Shack is known for their seafood favorites like ceviche and fresh fish tacos. However, their menu also features burgers, chicken and salad, as well as beer, cocktails, tequilas and wines. The restaurant offers cantina-style dining in their lower level and rooftop al fresco dining in their upper level.

Zona Romantica, known in English as The Romantic Zone, is the busiest neighborhood in Puerto Vallarta and is the center of the city’s LGBT community.

The area is also known as South Side, Old Town and Old Vallarta. The streets of Zona Romantica are lined with an array of art galleries, bakeries, bars, cafes, restaurants and shops.

Honolulu is the capital city of Hawaii. In 2013, the Hawaii Marriage Equality Act was passed, making it an excellent location for the LGBTQ community’s honeymoon destinations. The best time to visit Honolulu is in summer, but prices can be a bit high. If you’re on a budget, schedule your visit at the end of summer or late spring.

This is one of the most recommended hotels in Honolulu at trip advisor. La Croix is in a convenient location, and it’s near the famous Kalakaua Avenue. They have 191 spacious rooms, suites, and studios, all designed to give you the ultimate island experience.

You can enjoy many activities during your honeymoon, such as surf lessons and boat tours. At the end of the day, you can utilize their well-equipped sauna facilities or hit the gym.

Highway Inn is located on Ala Moana Boulevard, Honolulu. They have a huge variety of both modern and traditional foods that people have been enjoying since 1947.

If you’re too tired to sit and eat, you can carry some take away to your hotel room or order the food online.

Waikiki is located on the Southshore of Honolulu. It’s famous for its high-end resorts, shopping, entertainment facilities, and its gorgeous beaches.

It’s also the home of the ‘father of modern surfing,’ Olympic gold medalist Duke Kahanamoku. This means that swimming is highly practiced, and even the markers along the Waikiki historic trail are made of surfboards!

Taipei is in the republican city of China and has a population of 2.6 million as of 2019. Taiwan made history last year when it became the first Asian country to legalize gay marriages.

This luxury hotel is next to Q Square Mall and near Taipei Main Station. You can expect to find carved eagles, antique European furniture, and a mural depicting mythical creatures that are beautiful to watch.

That said, Palais de Chine also has a modern touch, including an onsite gym, an outdoor pool, among other necessities.

This is an excellent LGBTQ restaurant that you’ll love. They serve the most delicious beef noodle soup and other Taiwan’s sweet dishes. The historic dish goes back to the Tang Dynasty, and it’s served with red braised beef, vegetables, or beef noodle.

Yongkang Beef Noodle has been serving beef soup since 1963, so you’ll sure they have nothing but the best.

Wulai is the largest district of the new Taipei city and has a population of 6000. They are famous for hot springs where you can relax for a few hours. They also offer a cable car ride that can take you to an aboriginal village where you can buy handicrafts, souvenirs, and local cuisines.

Montevideo is the capital city of Uruguay. It lies in an area of 200 square kilometers and has a population of 1.387 million as of 2017. Uruguay approved same-sex marriage in 2010, which makes it a great honeymoon destination for the LGBTQ community.

This five-star hotel is located at Punta Carretas. The rooms are very spacious and well equipped with modern bathrooms and comfortable beds. Through the large windows, you can see the beautiful surrounding areas of the hotel. The hotel is near a shopping center full of amenities in case you run out of your necessities.

This is an exceptional place to have dinner with your partner. Yet, you’ve got to book in advance because it only accommodates two sittings throughout the night. The restaurant is ideal for meat lovers. As you may have heard, Uruguay is one of the world’s largest meat consumers, and they pride themselves on the different ways of cooking meat.

One way of preparing meat in the country is with Parilla, and La Pulperia does it best.

If we are completely honest, being in a same-sex relationship isn’t a walk in the park. There is so much negative energy that you have to fight. In honor of this, visit the Mausoleo al General José Gervasio Artigas. The latter is the home of the remains of José Gervasio Artigas. He is a national hero who fought for independence in the 1800s. After years of fighting, he was exiled to Paraguay, where he died. The remains were transported back to Uruguay and are guarded at all times.

This is an island in the Cyclades group in the Aegean Sea. It lies in 85 squared kilometers and has a population of 10 million as per 2011.

This is one of Greece’s most romantic hotels, which makes it a great honeymoon destination for LGBTQ communities. It has excellent beach pools, mega yacht services, spa, just to mention a few. To be honest, if this is the only place you stay during your honeymoon, you’ll still make beautiful memories.

If you close your eyes and think of any aroma or traditional flavors back to the 18th century, then you have the Bakalo menu. Some of their options include marinated octopus from Syros, Mykonian spiced cheese with peppers, and baked mushrooms with pork and gruyere cheese from Naxos.

This is a suitable venue for newlywed couples because it’s among the less frequented beaches. Agios Sostis beach has no sunbeds, restaurants, or beachfront bars. This means you may need to prepare yourself by carrying snacks and any other necessities, but it’s a perfect place to relax together.

There you go! A short and sweet list of the best LGBT honeymoon destinations around the world! I don’t know about you, but I like when lists get right to the point and just bottom-line it for me.

My top pick? Hard to say. They’re all so beautiful! I always wanted to visit Amsterdam, though, and not for the reasons people usually think! I just think it’s beautiful!

Your turn! What are your picks for the best LGBT honeymoon destinations around the world