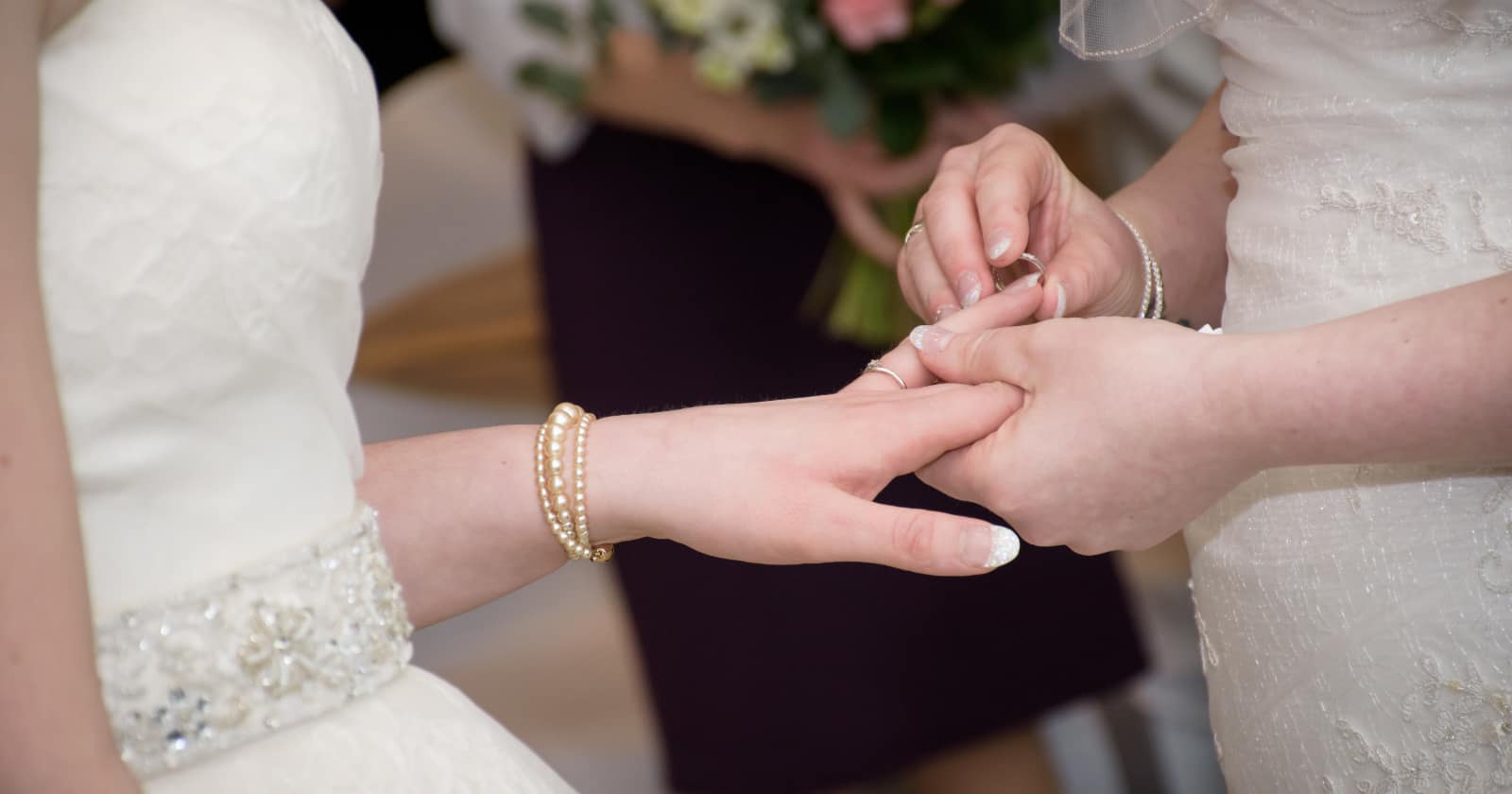 We’ve got your weekend viewing all lined up with the best gay & lesbian TV weddings.

So, grab your partner, pop some popcorn, cozy up, and get ready to binge!

If these touching moments in LGBTQ television history don’t melt your heart, then I don’t know what will!

Same-sex weddings have been shown on an array of television show genres, including children’s animated shows.

Here are some of the most memorable same-sex weddings to be shown on television.

All My Children is an American television soap opera that aired from 1970-2011.

The wedding of Bianca Montgomery (Eden Riegel) and Reese Williams (Tamara Braun) was the first legal same-sex wedding in the history of daytime television.

Arthur is an American-Canadian, animated, educational television series that has aired since 1996.

In Season 22, Episode 1- “Mr. Ratburn and the Someone Special,” which aired on May 13, 2019, features the wedding of Arthur’s teacher, Mr. Nigel Charles Ratburn and Patrick, a local chocolatier.

The episode received a lot of praise for how well a children’s show depicted LGBT characters in such a casual, natural way.

In the Season 2, Episode 16- “Prior Commitments,” which aired on May 11, 2008, Kevin Walker (Matthew Rhys) and Scotty Wandell (Luke Macfarlane) tie the knot.

This was the first time that two series regular characters are married on network television.

Conan is a late-night talk show, which has aired since 2010, hosted by Conan O’Brien.

The show aired live from the Beacon Theatre in Manhattan. While it’s not on YouTube, you can check it out here.

Season 2, Episode 11, titled “The One With the Lesbian Wedding,” which aired on January 18, 1996, was the first primetime TV episode to showcase a lesbian wedding.

Glee is a comedy-drama, musical television series that aired for 6 seasons, from 2009-2015.

The series won the GLAAD Media Award for Outstanding Comedy Series in 2010 and 2011.

Neighbours is an Australian television soap opera that has aired since 1985.

A Season 34 episode that aired on September 3, 2018, was the soap opera’s first LGBT wedding.

(The series showed 42 weddings prior to the LGBT wedding). The episode featured the wedding of Aaron Brennan (Matt Wilson) and David Tanaka (Takaya Honda).

Queer as Folk is an American-Canadian serial drama television series that aired for 5 seasons, from 2000-2005.

In Season 2, Episode 11- “The Wedding,” which aired on March 31, 2002, the wedding of Lindsay Peterson (Thea Gill) and Melanie Marcus (Michelle Clunie) took place.

This episode, which aired on December 12, 1995, was the first time an American television series portrayed a same-sex wedding involving a recurring character.

The series won the GLAAD Media Award for Outstanding Comedy Series in 1992 and 1993.

The Fosters is a family drama television series that aired for 5 seasons, from 2013-2018.

The head of the Foster family household, lesbian couple Stef (Teri Polo) and Lena (Sherri Saum), have had 2 weddings throughout the series.

This was the first same-sex commitment ceremony to be televised. Sadly, Zamora passed away on November 11, 1994, just hours after the season finale aired on November 10, 1994.

At the age of 22, Zamora died from complications of AIDS. Tragically, Sasser also died, on August 7, 2013, at the age of 44, from mesothelioma.

There you go! A dozen epic gay and lesbian TV weddings that are sure to melt your heart!

Do you have any favorite same-sex weddings on TV that we missed? Share below!

Netflix’s Lesbian Documentary ‘A Secret Love’ Warms The Heart But Does It Miss the Mark?