The Best Lesbian Wedding Quotes That Will Inspire You

When I was looking for the best lesbian wedding quotes,  I knew I wanted to use a unique angle, but I wasn’t sure, at first, exactly what that would be.

Then, a light bulb went off in my head and I decided that I would do a unique set of wedding quotes- song lyrics!

Sure there are lots of songs that are used at weddings, but most of them aren’t geared towards lesbian couples who are getting married.

This is really unfortunate because while the language of love is universal, many of the songs used for weddings aren’t.

So, without further ado, here are some awesome songs to play at your wedding! 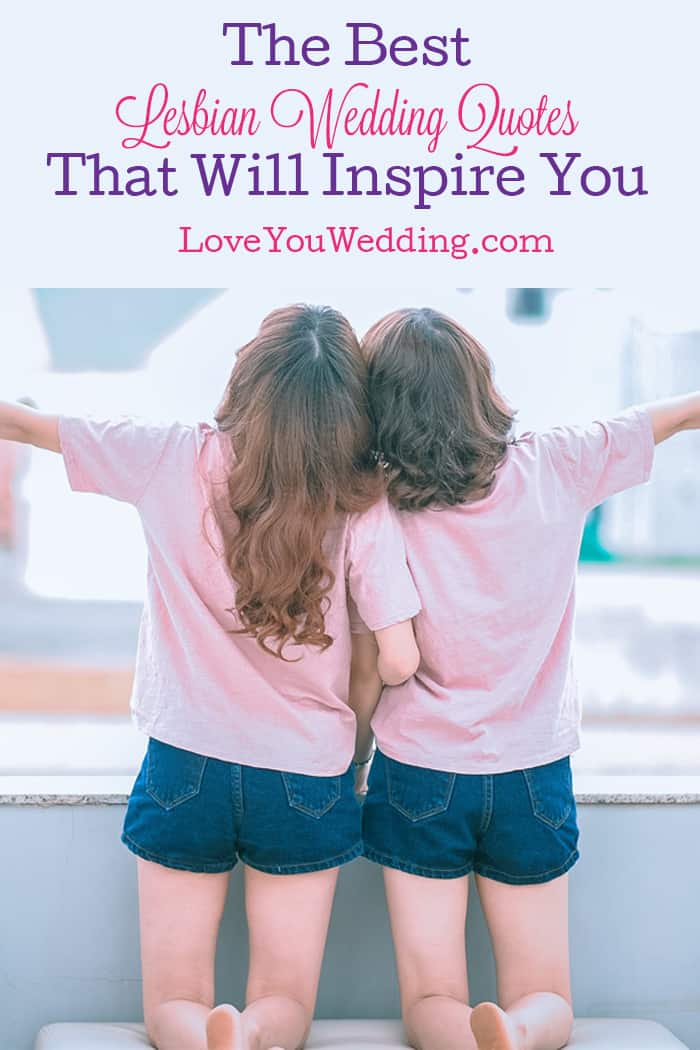 Use these lesbian wedding quotes inspired by songs to make the ultimate reception playlist, or just choose your favorite lines to add to your speech and/or wedding decor.

Heads up: This post contains affiliate links. If you make a purchase through these links, we earn a small commission at no extra charge to you.

1. Kiss That Counted by Catie Curtis

Catie Curtis is a folk rock music singer and songwriter. Kiss That Counted is from her 2001 album- My Shirt Looks Good on You

In 2002, Catie won the Boston Music Award for Song of the Year on an Indie Label for the song. Catie is the mother of 2 daughters- Lucy and MJ, with her ex-wife Liz Marshall.

2. Because You Loved Me by Celine Dion

This is a gender neutral song. I am almost 100% sure that you’ve heard of Celine Dion, but in case you haven’t, she is a pop music singer who has won 252 awards, so far, for her outstanding music.

. The song is the theme song from the 1996 movie- Up Close and Personal

. The song went to #1 in Australia, Canada and the United States.

Best lyrics- “You gave me faith ’cause you believed. I’m everything I am because you loved me.” Check out the video below for complete lyrics.

Doria Roberts is a folk, jazz and pop music singer. Perfect is from her 1999 album- Restoration. Doria, along with her wife of 10 years- Calavino Donati- own the Urban Cannibals Restaurant in Atlanta, Georgia. (I really like this song. It is memorable, romantic and playful).

Best lyrics- “The way you look at me when everything is perfect. A perfect memory of when things are so good. And everything has worked out just the way we knew it would.”

Find all the lyrics on Genius.com lyrics.

4. Power of Two by Indigo Girls

Indigo Girls are a folk rock music duo featuring- Amy Ray and Emily Saliers. Power of Two is from their 1994 album- Swamp Ophelia

Have you heard of Indigo Girls before? If you haven’t, go listen to this song! It is a great starter song for new Indigo Girls fans.

Between their powerful voices and the beautiful song of acoustic guitars, this song shows us that true love can prevail through the good times and the bad times too.

Best lyrics- “Adding up the total of a love that’s true. Multiply life by the power of two.” Check out the video below for complete lyrics.

5. She by Jen Foster

Jen Foster is a singer whose music incorporates elements from an array of genres, including country, dance, folk, pop, R&B and rock.

She is also a musician, performer, record label owner, record producer and songwriter.

. The song has gained her recognition at the 2001 Great American Song Contest, where she won the Hall of Fame in the pop music category.

In my honest opinion, Jen Foster has one of the most beautiful and unique voices around.

Best lyrics- “Cause I have found someone that I think is beautiful, And I have fallen in love.”

6. I Kissed a Girl by Jill Sobule

No, this isn’t the same song by Katy Perry! Jill Sobule is a singer and songwriter whose music features folk rock and indie rock.

I Kissed a Girl is from her 1995 album- Jill Sobule

. The song reached #20 on the Modern Rock Tracks Chart.

I had never heard this song before, so I went and had a listen. To say I was impressed is an understatement. The song features a playful tone with an empowering subject matter.

Best lyrics- “I kissed a girl, won’t change the world. But I’m so glad I kissed a girl.” Check out the rest of the lyrics on Genius.com.

Kathryn Dawn Lang, better known as k.d. lang, is a country and pop music singer and songwriter. Constant Craving is from her 1992 album- Ingenue

I’m pretty sure that no matter how old you are, you’ve probably heard this song a time or two, haven’t you? I think the song is a sweet serenade, magnetic song that pulls you in right from the very first words.

Best Lyrics- “Maybe a great magnet pulls all souls to what’s true.” Check out the video below for complete lyrics!.

8. She Keeps Me Warm by Mary Lambert

Mary Lambert is a pop music singer. She Keeps Me Warm is from her 2013 album- Welcome to the Age of My Body

You may have heard this song before, but do you know how it came about?  Mary was the featured artist on the 2012 song- Same Love- by Macklemore & Ryan Lewis

Following the release of Same Love, Mary used the chorus to create She Keeps Me Warm.

She has stated that She Keeps Me warm comes from her personal experiences of growing up, as a lesbian, in a Christian household.

Best Lyrics- “She says I smell like safety and home. I named both of her eyes- Forever and Please Don’t Go.”

9. Come to My Window by Melissa Etheridge

Melissa Etheridge is a rock music singer and songwriter. Come to My Window is from her 1993 album- Yes I Am.

The song was the first single that she released after coming out, publicly, as a lesbian. Come to My Window earned Melissa the 1995 Grammy Award for Best Female Rock Vocal Performance.

Melissa is the mother of 3 children- Bailey, with her former long-term partner- Julie Cypher, as well as Johnnie and Miller, with her ex-wife- Tammy Lynn Michaels.

So, beside the fact that Come to My Window is one of the best love songs, Melissa Etheridge is truly an inspiring woman.

She is a very passionate gay and lesbian rights activist. In fact, The Advocate– a LGBT-interest magazine, named her the 1995 Person of the Year.

10. From This Moment by Shania Twain

Warning- this may get a bit lengthy because as a huge, long-time fan of county music, Shania Twain is my all-time favorite!

Like Because You Loved Me, this is a gender neutral song). Shania Twain is a country and pop music singer and songwriter.

From This Moment is from her 1997 album- Come on Over. She is the best-selling female artist in country music history, with more than 100 million records sold.

In addition, she has won 188 awards since 1993, including 13 Juno Awards, 8 Billboard Music Awards, 6 American Music Awards and 5 Grammy Awards.

Okay, I think I am done with my Shania Twain praises now. Anyways, From This Moment is one of the most beautiful and touching love songs of all time, in my opinion.

I hope you enjoyed my unique spin on the best lesbian wedding quotes! Any of these song lyrics would make an excellent addition to your speech!

Do you have any favorite lesbian wedding quotes? Share below!