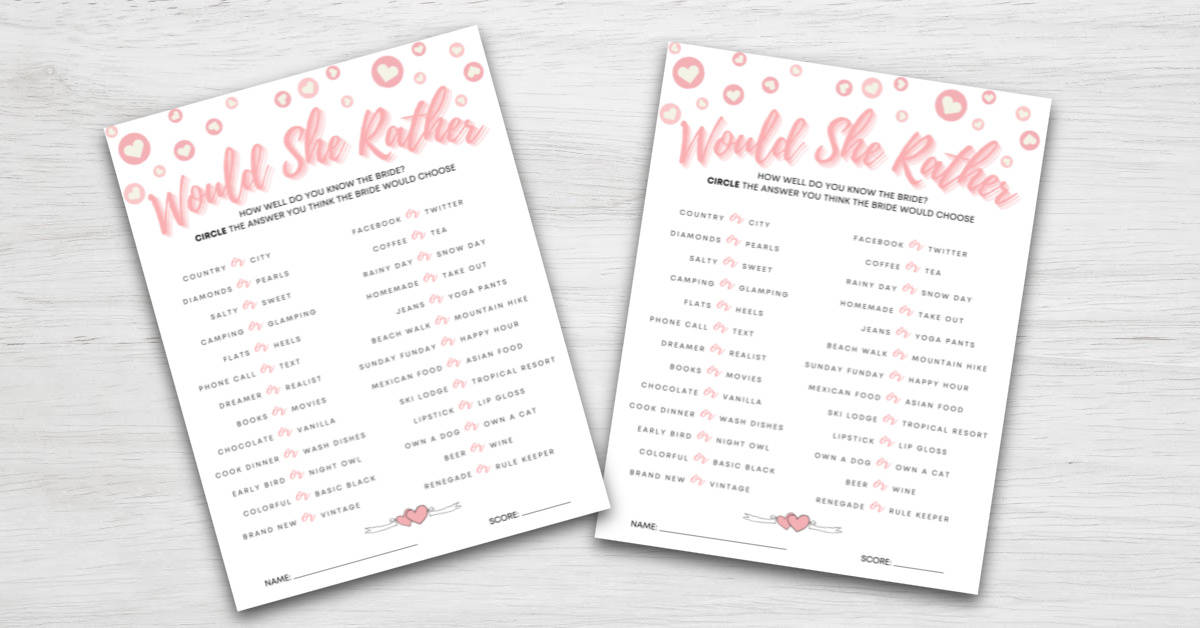 Is the bride a renegade or a rule keeper? Mountain hike on a Sunday Funday or Happy Hour at the beach type of gal? Think you know the answers? Prove it with our “Would She Rather” bridal shower printable game!

Table of Contents: hide
1) What do you need to play Would She Rather
2) How to Play
3) Extra tips
4) Advantages of the ‘Would She Rather’ Game
5) Conclusion

Pit your guests against each other to find out who truly knows the bride best. Read on to learn how to play.

What do you need to play Would She Rather

That’s it! Super simple yet so much fun!

If you’re throwing an online shower, set up email drafts ahead of time. When it’s time to play, just hit send. That way, everyone gets their copy at the same time.

Since it’s highly likely that more than one player will win each game, consider doing a “grand prize raffle” rather than a ton of smaller prizes. One big thoughtful prize will do the trick. Just put every winning sheet into a bag, then select one at random at the end of the party.

Do not forget that the game is an integral part of the Bridal Shower celebrations. The Bridal Shower agenda can be reflected by infusing the colors of the bachelorette party night decorations on the printout copies.

Something about this awesome bridal shower game is that it can be tweaked to your desire. Additional questions are welcome.

Moreover, it could be that your group has a lot of dirty minds. You can include dirty questions about the bride’s sexual fantasies.

You are also free to make your own input to the structure, mode and content of the game. You can ask complicated questions instead of common questions. You can also add funny questions to create a romantic comedy atmosphere.

Advantages of the ‘Would She Rather’ Game

Unlike most popular party games, this bridal shower game idea does not require game cards. This makes it easier and cheaper to organize.

The absence of bridal shower game cards also implies that the game can be played virtually. This means that friends of the bride who are unable to make it physically can partake in the distance bridal shower game.

As earlier stated, the game’s openness to modification is an added advantage.

How to Elope: Everything You Need to Know About Running Away to Get Married