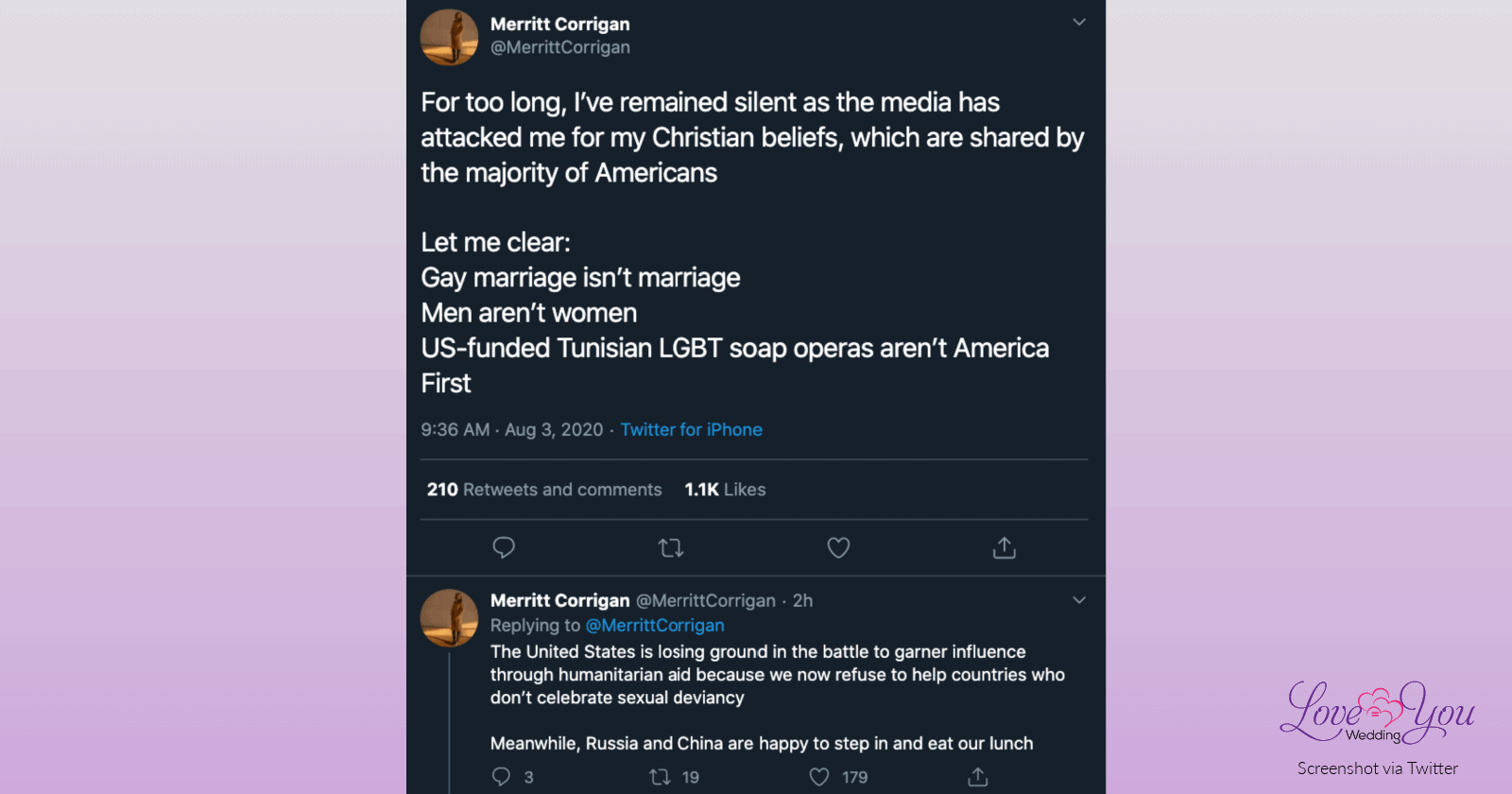 Merritt Corrigan, a Trump-appointed White House USAID liason, lost her job on Monday after posting a series of homophobic and transphobic tweets, then defending them as her “Christian beliefs.” Read on for the full story.

Merritt Corrigan, Donald Trump’s political appointee, has been fired from the White House after posting a string of anti-LGBT+ tweets that she defended as “my Christian beliefs”.

Corrigan, who was the deputy White House liaison to the US Agency for International Development (USAID), tweeted that “gay marriage isn’t marriage” and that she’s “not cis-anything”.

Two former Trump administration officials confirmed to NBC News that Corrigan had been fired from USAID on Monday (3 August) after her anti-gay marriage and anti-LGBT+ comments.

In a seven-tweet thread, Corrigan said she’d “remained silent” for “too long” while the media “attacked” her for her Christian beliefs, which she said are shared by “the majority of Americans”.

For too long, I’ve remained silent as the media has attacked me for my Christian beliefs, which are shared by the majority of Americans

She continued: “The United States is losing ground in the battle to garner influence through humanitarian aid because we now refuse to help countries who don’t celebrate sexual deviancy. Meanwhile, Russia and China are happy to step in and eat our lunch.

“I watched with horror this week as USAID distributed taxpayer funded documents claiming ‘we cannot tell someone’s sex or gender by looking at them’ and that not calling oneself ‘cisgendered’ is a microagression [sic]. I’m not cis-anything. I’m a woman.”

Merritt Corrigan was appointed to USAID by Trump earlier this year. She has a long history of online posts denouncing liberal democracy, feminism, abortion and the LGBT+ community.

I’m not cis-anything. I’m a woman.

Corrigan added that she’ll be holding a press conference this Thursday to talk about the “rampant anti-Christian sentiment” in America’s foreign aid agency.

She also accused two Democrats, senator Bob Menendez of New Jersey and representative Eliot Engel of New York, of “[engaging] in a corrupt campaign” to make her lose her job.

Two more Democrats, senators Tim Kaine and Cory Booker, were also accused by Corrigan of trying to “oust” her from USAID “purely because of my Christian beliefs”.

“I WILL NOT be bullied into submission by radical anti-Christian leftists like Cory Booker,” Corrigan concluded.

Merritt – from a proudly gay woman, I just want you to know you’re trash, and if you’re shitty enough to get fired in the Trump regime, it’s time to re-evaluate who you are as a human being.

Corrigan’s firing comes after employees at USAID raised concerns at the appointment of an official with a deeply homophobic record.

Her history of homophobic comments initially surfaced in June, when it was revealed she had attacked the US “homo-empire” and “tyrannical LGBT+ agenda”.

This post first on PinkNews – Gay news, reviews and comment from the world’s most read lesbian, gay, bisexual, and trans news service.

5 Stunning and Creative Hers and Hers Wedding Rings Ideas