While much of the country is on lock down and fighting a pandemic, two Texas judges chose to pick an entirely different fight.

They want to deny same-sex marriages based on their religious beliefs, and they’re ready to take it to court.

According to the two judges, their religious beliefs should allow them to refuse same-sex couples from marrying, and they are ready to bring it to the court.

According to him, the U.S. Constitution can be interpreted in a way that doesn’t require him to perform same-sex marriages.

And more, as the First Amendment protects his decision based on his religious beliefs.

As of the current situation, Umphress and other judges that refuse to tie same-sex marriages can be subjected to disciplinary actions.

Although Umphress is not a law Judge, he is allowed to perform marriage ceremonies.

He is currently the Judge of the Jack County Commissioners Court.

Unfortunately, this is not the first and definitely not the last case in Dallas.

In November, a similar lawsuit was filed, backing up Umphress’s current situation, by Dianne Hensley, in McLennan County.

After being punished for not performing a same-sex wedding because of her religious beliefs, she answered by suing.

Hensley said that she would “recuse herself from a case in which a party doubted her impartiality on the basis that she publicly refuses to perform same-sex weddings.”

In her case, the state commission decided that she was unable to be impartial regarding gay marriages.

Right now, Umphress is motivated to stand against gay marriages.

He is planning to run for re-election in 2022, and wants to create a platform to oppose to gay marriages, as he adheres to a “Bible-believing church.” and “marriage only exists between one man and one woman.”

So far, the commission didn’t give an answer to this situation, nor release any statements in this direction. 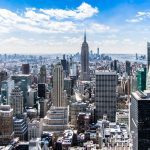 New York Lesbian Couple Gets Married in the Street

Of Course, The Parties Are Divided

The co-president of the Freedom From Religion Foundation, Annie Laurie Gaylor approves with the Texas judicial commission’s decision, as no judge should be above the law.

If they don’t want to carry out their duties, then they should retire or resign.

She supports freedom and she believes that sexual orientation should be irrelevant to the judges.

On the other hand, Jeremy Dys, one of Plano-based First Liberty Institute’s attorneys comes in Hensley’s defense, saying that even though she refused gay marriages, she made a list with other options for them to get married.

Dys appreciates her creativity and believes that she should not be investigated.

She should be applauded for being creative.

Right now, the situation is unsure.

In 2018, a Colorado business owner was allowed to refuse gay couples, but that doesn’t generally apply to government-provided services.

The Supreme Court also agreed to hear the Philadelphia cases, where the foster homes wouldn’t place children in same-sex facilities, even though they want to keep their contracts with the city.

We are looking forward to see how the situation moves, and we are hoping for a positive outcome.

What are your thoughts on these two Texas judges wanting to deny same-sex marriages? Share below!

Could Your Inbox Use Some Inspirational Stories? We've got you covered

Get our WEEKLY Newsletter