More and more television giants are taking a step forward, bringing LGBT romance to the screens.

Star Trek: PIcard is the latest to bring a same-sex couple into their story line and their series into the 21st century.

During their finale, viewers were treated to a surprising scene between two major characters.

You may also love: Lesbian Couple Appears in ‘Clifford, The Big Red Dog’

SPOILER ALERT! Last chance to back out if you haven’t seen the season finale of Star Trek: Picard.

To be completely fair, this is not really the first time we see a same-sex story on the Star Trek set.

Throughout the time, we’ve seen quite a few LGBTQ relationships and references in the Star Trek series, so the Seven of Nice and Raffi Musiker couple is not exactly a new concept.

In 2016’s Star Trek Beyond movie, we have seen the beautiful image of Hikaru Sulu, having a gay marriage and a daughter on the screens, making everything possible.

This was not necessarily planned though.

In the original plan, Sulu was supposed to be a straight character, but these aspects can always change, in this case for the best.

George Takei, the actor playing Hikaru Sulu, is gay himself, so he managed to perfectly express everything through his character.

A better-seen couple though was the Star Trek Discovery one. We had Paul Stamets, the U.S.S. Discovery’s chief engineer, and Hugh Culber, the medical engineer in a romantic relationship, right there, on the starship.

Culber was killed somewhere in mid-season, but the couple was incomplete without him. He appeared back miraculously when the new season aired, reviving the love. 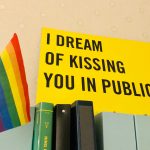 The thing that makes the new couple special, is that no one really expected it. It wasn’t obvious that out two ladies were anywhere close to bisexuals.

In Voyager, we saw Seven in a relationship, but it was a straight one.

We saw her involving with the first officer Chakotay through the series, but not giving any other clues.

And the same stands for Raffi. Her story is portraying her in a straight romantic relationship and she even gave birth to a boy.

He was estranged before the season started, leaving other gates open for the story to continue.

The Seven-Raffi had a very subtle start with their relationship.

No one imagined that they would be bisexual considering their backgrounds.

We saw a lot of looks and subtle messages, and their development is considered more organic than others.

Star Trek is one of the giants that have been constantly promoting diversity.

They started in 1966 and even though they had a slow progress, they managed to create a great image.

They openly embraced different sexual orientation and gender identities and shown the world that everything is possible.

It’s no longer about implying the relationships, but about showing how they really are, and that people can and should be happy with themselves.