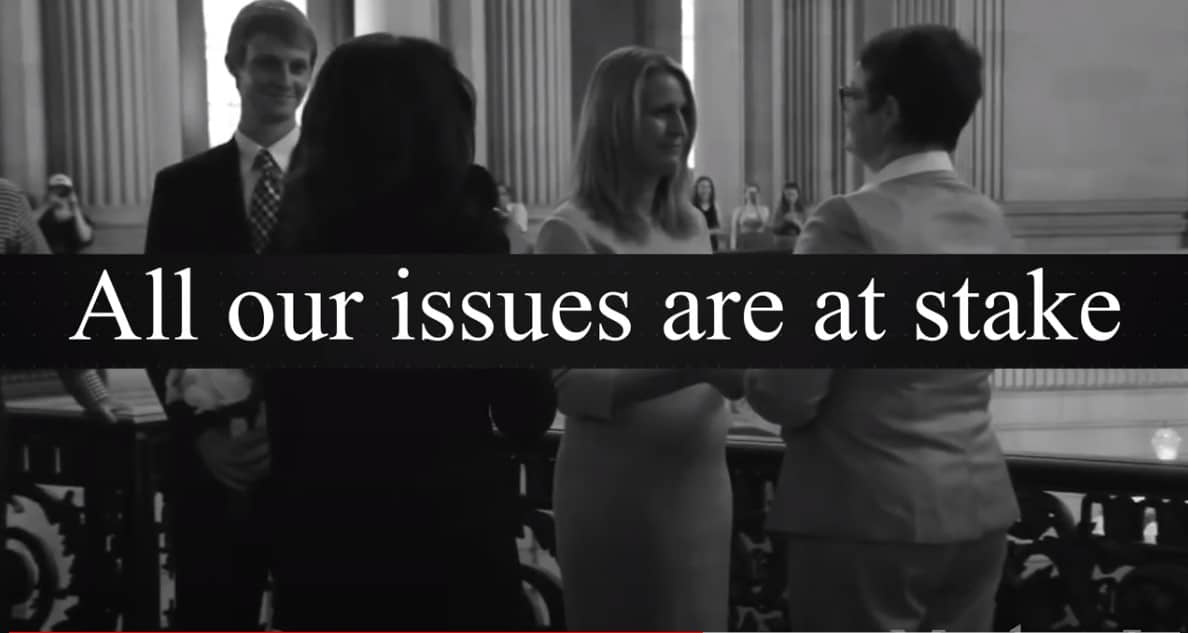 Republicans just launched a new political ad showing Kamala Harris officiating at a lesbian wedding, using it to illustrate why Amy Coney Barrett needs to be confirmed to the Supreme Court. Their “call to action” reads, “All our issues are at stake. Marriage. Life. Religious liberty.” Ironically, it also serves as a reminder to the LGBTQ community of exactly what is at stake if Barrett is confirmed. Read on for the full story.

National Organization for Marriage, an anti-LGBTQ group that opposes same-sex marriage, paid for and released the video (below) to support the confirmation of Amy Coney Barrett to the Supreme Court.

Along with the brief footage of Kamala Harris officiating a lesbian wedding midway through the video, it also shows a selection of “protestors” and Tweets that support their narrative. Exactly what is that narrative? One can only guess what goes through minds like these. However, they appear to be saying that without Amy Coney Barrett on the Supreme Court, violent protestors will wreak havoc and burn the country to the ground. The video ends with the ominous warning, “All our issues are at stake.”

The footage of Kamala Harris comes from  Sandy Stier’s and Kris Perry’s wedding in 2013, according to LGBTQ Nation. Perry and Stier challenged California’s Prop 8 in court and won, making their wedding a historic event for LGBTQ rights. Harris was the Attorney General at the time.

LGBTQ Nation shared the words from an email blast that went out with the NOM ad. In it, they write,

“Amy Coney Barrett is a perfect pick for the US Supreme Court. A devout Catholic, mom of seven and a gifted intellectual, she shares our beliefs on the issues most important to us – marriage, life and religious liberty. That is why the left hates her so much.”

Of course, the email finishes off with a request for monetary donations to the “NOM Education Fund.” According to NOM’s website, that Fund was, “was founded in order to respond to the growing need for an organized promotion and defense of marriage in state and federal legislatures, in the courts at all levels, and in the general culture.” It goes on to say,

The NOM Education Fund’s mission is to conduct research, public education, and strategic projects that promote an understanding of marriage as the union of one man and one woman.

Earlier this week, LGBTQ Nation shared some very disturbing words from NOM’s co-founder, Brian Brown, that further illustrates their stance on gay marriage. Brown told his followers that Barrett needed to be confirmed so that “the fake ‘rights’ that are constantly demanded by the left – including special rules for homosexuals and the so-called transgendered – will no longer see the light of day.”

Ad Serves as Reminder That LGBTQ Issues Are at Stake

NOM’s final words in their strange and disturbing ad are also a reminder to the LGBTQ+ community and its allies, all of our issues are at stake, too. Barrett’s confirmation could very well undo decades of fighting just for the right to marry, not to mention the damage it will do to cases already heading to the Supreme Court later this fall.  Kevin Jennings, CEO of Lambda Legal, summed it up perfectly when he said,

“It is impossible to overstate how much is at stake, not only for LGBTQ people and everyone living with HIV, but for our entire country. If confirmed, Judge Amy Coney Barrett will unleash a Supreme Court majority that is hostile to all of our basic civil rights, and the impact will be felt for decades.”

What do you think about NOM’s political ad using footage of Kamala Harris officiating a lesbian wedding? Are you worried about what Barrett could do to LGBTQ rights? Share your thoughts below.

Olfa Turki is the founder, owner and managing editor of LoveYouWedding. She’s been called a “tornado” by her partner and those who work with her and for good reason! When she gets an idea in her head, nothing can stop her. She believes everyone should have access to the resources they need to plan their dream wedding, which is why she’s dedicated LoveYouWedding to helping LGBTQ+ couples.