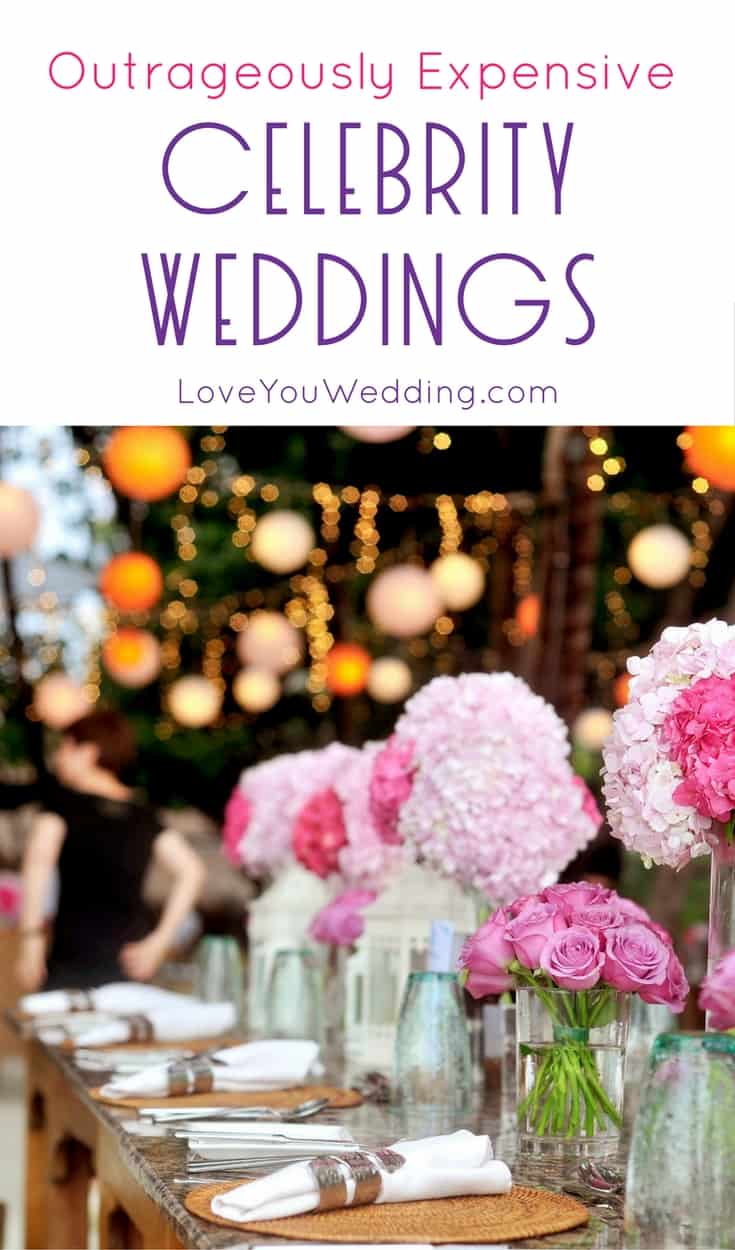 I don’t know about you, but I have a hard time spending $10 on a new shade of mascara, let alone dropping a cool million on on a wedding! Am I right? If you think your wedding day costs are adding up, you will be shocked to learn that some celebrities spend millions on their wedding. Yes, I said MILLIONS! Here are some of the most crazy expensive celebrity weddings.

At $34 million, this is definitely the most costly of these four expensive celebrity weddings!  Who in the world spends $34 million on a wedding? Apparently, royalty does. Prince William and Kate Middleton started dating in 2003, became engaged in October of 2010 and were married on April 29, 2011 in London, England at Westminster Abbey, followed by a reception at Buckingham Palace. The bulk of the cost ($32 million of it) went directly to security detail. Other expenses included $434,000 for Kate’s designer wedding gown, $800,000 in flowers, $60,000 in bottles of Bollinger champagne and $80,000 for his and her wedding cakes.

$20 million- James Stunt is a British billionaire (with an estimated net worth of $6 billion), who funds his lavish lifestyle through investing in cargo vessels, real estate, and gold mining. Petra is the daughter of Bernie Ecclestone, Chairman Emeritus of the Formula One Group. The couple began dating in 2007 and were married on August 27, 2011. They were married in the Medieval Italian town of Bracciano, at the Odescalchi Castle, which cost the couple $512,000 to use for their big day. Guests were treated to $6,000 (per bottle) champagne. Petra’s wedding gown, by Vera Wang, costs a whopping $1.3 million.

$10 million- Pro Basketball star Kris Humphries and socialite/reality TV personality, Kim Kardashian, spent an estimated $10 million on their extravagant wedding. Here’s the kicker: Kim filed for divorce just 72 days after the couple was married. Yes, 72 DAYS! What a waste of $10 million. The couple started dating in October of 2010, got engaged in May of 2011 and were married on August 20, 2011, at a lavish estate in Montecito, California. Kim had 3 different Vera Wang wedding dresses made for the occasion, to the tune of $20,000 each! Other wedding expenses included $2 million for flowers, $10,000 for invitations and $6,000 for the wedding cake.

$10 million- Michael Jordan, the now-retired NBA pro basketball player, and Yvette Prieto, a Cuban-born model, began dating in 2008 and became engaged in 2011. The couple was married on April 27, 2013, at the Episcopal Church of Bethesda-by-the-Sea in Palm Beach Florida, followed by a lavish reception at the Bear’s Club in Jupiter, Florida. The extravagant event featured musical performances by Usher and Robin Thicke. Yvette’s designer wedding gown, made by J’Aton Couture, featured handmade French silk complete with Swarovski crystals.

While the cost of these expensive celebrity weddings is kind of shocking at first glance, you have to remember that some of these people make millions of dollars at the drop of a hat (or a ball). The one that really surprised me? The royal wedding! If you take away the cost of security (which, let’s face it, they needed in a major way), that wedding was actually the “cheapest!”

Did the cost of any of these expensive celebrity weddings really surprise you? Share your thoughts below!

Bridal Flats That Will Make Your Wedding Day Comfortable

12 Unique Something Blues for Your Wedding Day