As the Australian version of the ‘Married At First Sight’ featured a same-sex couple, many views feel that that the US version needs one too. That includes the US show’s own star, Jamie Otis. In a recent interview, she spilled the beans on why she thinks the show lacks diversity. Read on for the full scoop.

In an interview for Fox News, Jamie Otis shared her opinion regarding the lack of diversity on the US show.

I’m not going to lie, I have definitely chatted with the production company about why do we not have older couples and why don’t we have same-sex or more interracial couples.

In the show, the couples agree to legally marry a person they see for the first time. Of course, they are given a few weeks to decide if they are going to go through with it, or not. Otis, who is now the mother of two, said that she did talk to the producers about this.

I think it’d be amazing to see [more]. I know that ‘Married at First Sight’s American version would love to show that diversity. It just comes down to the logistics of casting, from what I’ve been told, and who’s actually applying and things of that nature.

And this leaves us thinking that it would definitely be possible to have same-sex couples in the American version of ‘Married At First Sight.’

In 2016, Australia made history for having the first same-sex couple on the show, and since then, people are curious to see what else is going to happen. Unfortunately, according to John Aiken, one of the relationship experts behind the show, said that they really need to take into consideration people’s compatibility before making a decision. He said.

We’re not happy we’ve only had one successful match over five series. We would like a higher strike rate.

Regardless, Otis still hopes that in the future, she will get to see same-sex couples in the show.

I’d love to see more of that in the American version. I’m rooting for that. I hope that comes soon, whoever it is. Love is love and let’s support that.

In 11 ‘Married At First Sight’ seasons and eight spin-offs, there hasn’t been one same-sex couple. On another note, very few of the couples actually stay together after the show, either. Jamie and her husband, Doug, are one of the few, and just welcomed their second kid into their family. 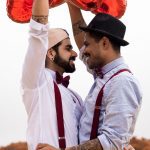 As their family is currently participating in a MAFS spin-off, they have cameras around their house at all times, and she even got to record her birth. Although she is a labor and delivery nurse herself, she stated that it was a little daunting, but said the experience was incredible. The episode is set to air on Wednesday.

It was quite the experience. It was so painful and all-consuming but it was the most magical moment of my life being able to feel all of that. When I got to hold him and look at him, it’s an amazing moment.

As of now, ‘Married At First Sight’ Australia featured two same-sex couples. Even though they didn’t stay together after the show, it was incredible to see their progress throughout the show.

What do you think? Does the US version of Married at First Sight need more same-sex couples? Share below.