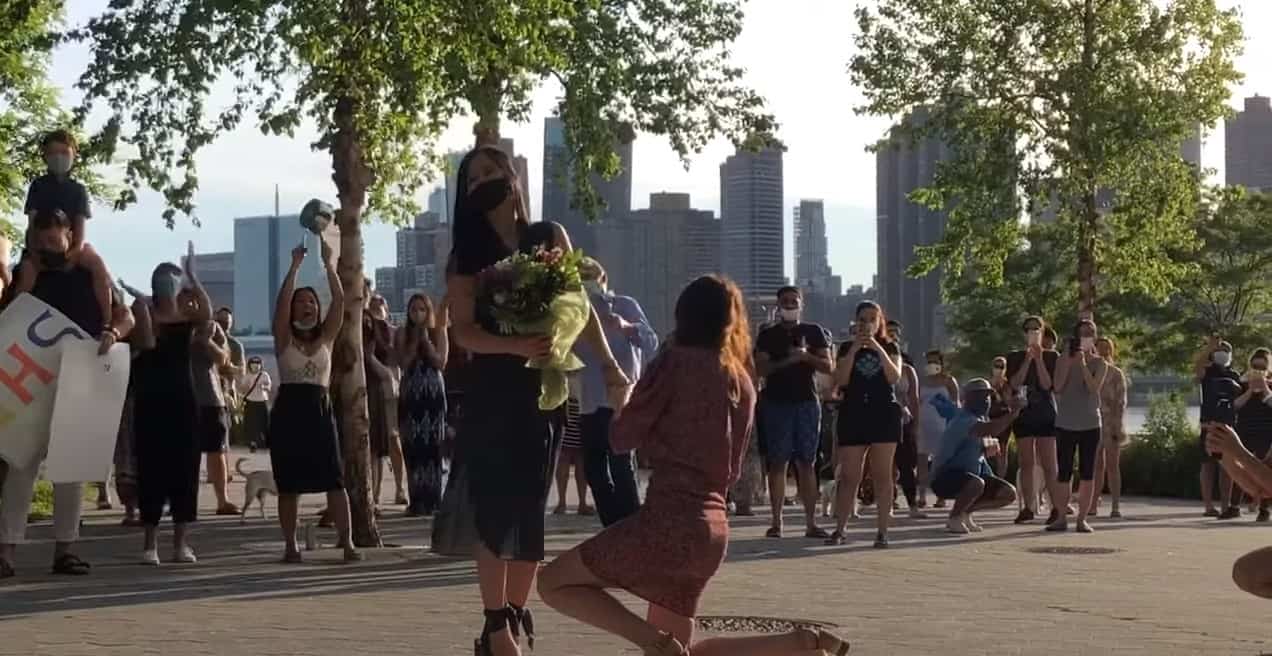 Get ready for a moving lesbian proposal that literally had hundreds of New Yorkers clapping with joy! Some of the people most deeply affected by the pandemic were the doctors and nurses. Although most of them have families, they had to isolate themselves in order to protect their loved ones.

Table of Contents: hide
1) A Moving Lesbian Proposal After 3 Months of Quarantine (Watch the Video)
2) A beautiful Pride Month proposal
3) Watch the video

This is the case of New York’s ICU nurse and singer Alyssa Kayhill. Kayhill and her girlfriend Trinh have been together for eight years and were completely inseparable before the pandemic. According to Alyssa, it was love at first sight. When the pandemic hit, and Kayhill had to go and help in the hospital, they had to stay away from each other for three months.

On Monday, when it was also Kayhill’s birthday, the girls were reunited in the most beautiful way. Alyssa asked her girlfriend to meet her outside of the TF Conerstone property, where her sister, Kristie Loscalzo lives. What Trihn didn’t know though, was that Alyssa arranged a whole thing for that night.

We have been extremely proud of her, always as a nurse, but especially during COVID. Our family has always been very proud of Alyssa, but seeing her step up and really do the right thing for all of these people has just made us even more proud.

The whole family was worried about her safety during these times, and naturally, they are incredibly happy that everything is alright now.

Got a new addition to my goggles thanks to some awesome pediatric doctors who stopped by. Got me thinking about one of my superheroes @awallace84. Badass nurse and mom to 2 of the cutest boys ever. She ended up getting sick with COVID through all of this but went right back to work taking care of patients as soon as she was able. Thank you Amanda for all that you do ???? Show some love and tag your fav superhero to say thanks??‍♀️??‍♂️. #superwoman #superhero #thankyou #inthistogether #frontlineworkers #covid_19 #family #nurses #nursesofinstagram #ppe #discoverthehamptons #holdfast

We really did try to just take it day by day and encourage her and support her in every way possible and let her know that we loved her and we were proud of her for everything she was doing.

Every day, Loscalzo sent her sister videos of the nightly 7 P.M cheer for medical workers and first responders in order to keep her motivated.

The whole community came together

She also made sure that when the girls would meet, the whole community would be extra supportive and encouraging. She contacted the TF Cornerstone management and they were thrilled to pitch in.

We contributed to the surprise proposal by rounding up our residents from 4540 and 4610 Center Boulevard to join in from a safe distance through cheers and applause, and they certainly did their part! We’ve all needed some uplifting news in the past few months, and we couldn’t have been more proud to support this lovely couple during Pride month.

Everything was perfect, but what was even better for Kayhill, was the fact that she proposed during Pride month. When she bought the ring, she had it engraved with “Love is what it will be,” which is a lyrics from the song she wrote a year back for Trinh, called “Love is.”

She said that the song is not only about their relationship, but “about anyone who has struggled with adversity in the relationship as far as the outside world telling you that it’s not right, whether that would be in a gay situation or if you’re with someone who’s a different race. Anything where people are kind of judging you from the outside for the love that you have.”

The moment was absolutely heartwarming. Loscalzo walked with Trihn to where they were supposed to meet and Kayhill instantly proposed while everyone cheered.

Doesn’t this lesbian proposal warm your heart right up? Share your thoughts below.