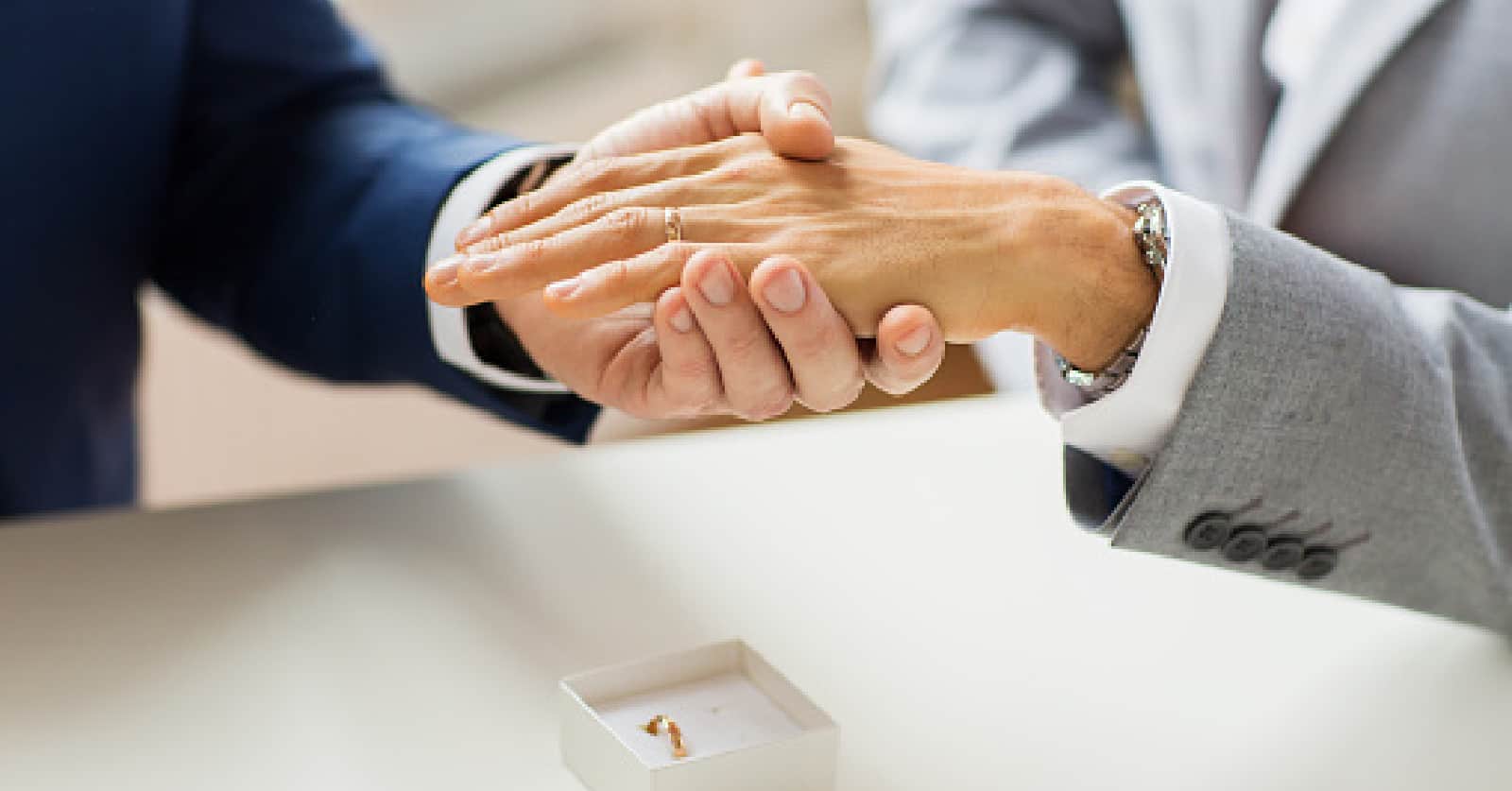 Think it’s too hard to tie the knot given current circumstances? Perhaps you need a little inspiration from couples who already got married during this pandemic! From downsized micro-weddings to sweet ceremonies in the middle of the street, these same-sex couples prove that with a little creativity, you can have a memorable day. Take a look!

According to the 2020 Brides American Wedding Study, 82% of Brides.com Instagram followers state that living through the coronavirus pandemic has “actually made them want to marry more and weather this, and any other storm, together.”

Lakesha & Nikia, an Atlanta-based couple, were married on March 20, 2020 in a small, intimate ceremony. The couple had been together for 5 years and were engaged in December 2019.

The ceremony took place in Decatur Square, Georgia, with just themselves, both their mothers and their officiant, The Modern Officiant (AKA Jemelle Wooten).

The reception was also held in Decatur Square at The White Bull, an Italian-American restaurant featuring a menu inspired by local, seasonal fare in a classy, welcoming atmosphere.

Nikia posted a video on her YouTube Channel, providing viewers with a glimpse into their wedding day.

Reilly & Amanda had planned to get married in October 2020, but they were uncertain what weddings would look like then, so they decided to move up their wedding date, to March 20, 2020. On May 19, the couple obtained their marriage license from the New York City Marriage Bureau.

They planned on returning the next afternoon for their wedding ceremony. However, the couple was heartbroken when, on Friday morning, Mayor Bill de Blasio announced that the Marriage Bureau would be closing indefinitely due to the pandemic.

Luckily, their friend Matt Wilson happily offered to marry them as he is certified by the city clerk to officiate weddings. Matt was in the midst of a self-quarantine, so Reilly and Amanda got creative. They stood at the intersection of Bennett Street and 190th Street in the Manhattan neighborhood of Washington Heights, while Matt officiated the ceremony from the window of his 4th floor apartment.

Reilly posted a video, which went viral, on her Instagram page.

Alex & Anthony, a Manhattan-based couple, initially planned to get married on March 21, 2020 at The Roundhouse, located in Beacon, New York. The venue is a unique, historical property featuring an industrial-chic boutique hotel, a hip restaurant with fantastic views of a majestic waterfall and rushing creek, as well as a stunning, popular wedding event space.

However, the pandemic hit and put those plans on the back burner. Alex and Anthony didn’t want to wait to get married so, keeping their original wedding date, they were married at The Battery, a 25-acre public park that’s within walking distance of the couple’s Manhattan home.

In attendance at the ceremony, besides the couple, was their officiant and 4 close friends acting as witnesses. Their families, who are scattered throughout the country, witnessed the nuptials via a Zoom video call.

Cesar Salza, a technology journalist for CNET Espanol and Kyle Hill, an interior designer and a choreographer, were planning a big wedding celebration in Mexico with all of their family and friends. However, after the coronavirus pandemic hit and the couple realized their big wedding wasn’t going to happen in June as they planned, the couple moved their wedding date to April 18, 2020.

Cesar and Kyle put a shout-out on Facebook to see if someone could officiate their smaller nuptials. A mutual friend of the couple’s hooked them up with Jared Scherer, a gay man who is a local marriage commissioner.

The San Francisco-based couple were married in a friend’s backyard. Kyle’s mother made swag bags for everyone, complete with , gloves, hand sanitizer and cookies.

The couple live-streamed their nuptials, on Zoom, for approximately 50 family and friends.

Bri & Lindsey, an Austin Texas-based couple, who are known on Instagram as “the.mrs.leavertons,” were initially planning an April 10, 2020 wedding at the historic boutique Hotel Ella. However, like many engaged couples were facing, the pandemic squashed those plans.

At the time Bri and Lindsey first met in the summer of 2018, they were both single parents- Bri has a son and Lindsey has twin daughters. After their initial wedding plans were squashed, the couple discovered that Doc’s Drive-In Theatre remained open since it is considered an “essential business.” Doc’s Drive-In Theatre is a retro-style drive-in movie theater, located in Buda, Texas, just 10 minutes south of Austin.

Bri and Lindsey married on April 28, 2020, with approximately 80 vehicles in attendance, along with social media broadcasts of the ceremony, including Lindsey’s YouTube Channel.

Ashlee & Stacey– Ashlee Barnett and Stacey Hughes form the team of The Go 2 Girls Los Angeles, personal organizers and moving specialists. They are also a couple; in fact, a hashtag on their company’s Instagram page, in a post on September 28, 2020 says it all- #partnersinlifeandbusiness.

After 2 years of planning their wedding, they officially put their wedding on hold, in May 2020, due to the coronavirus pandemic. However, they still wanted to get married instead of waiting, so they planned a smaller wedding in about 3 weeks.

Ashlee and Stacey were married on June 28, a date that is significant to both of them, as it was their 10th anniversary as a couple. Something cute and unique that the couple did was come up with cool, creative names for their wedding day looks.

Chaya & Jodyann wed on August 29, 2020, in what they called the “biggest, queerest wedding of the year.” While the couple lives in Milwaukee, Wisconsin, they opted to tie the knot in Indianapolis, Indiana The city is known as the Elopement Capital of the Midwest.

They wed in the private backyard of an Airbnb house, overlooking the White River. The only people present at the ceremony, other than the couple, was their officiant L.S. Quinn, who traveled from Ohio to officiate their wedding. Neither set of parents planned on attending their wedding.

Jodyann’s parents are traditional Jamaican folks who are very religious and are not accepting of her relationship with Chaya. Chaya, on the other hand, is estranged from her parents, but not because of her sexuality.

However, while Chaya and Jodyann lacked parental support at their wedding, they did have an outpouring of support from total strangers. The couple decided to livestream their wedding ceremony, ending up with 10,000+ virtual wedding guests from around the world. You can check out their beautiful photos on the New York Times.

See, it is possible to have some version of your dream day even during difficult times in the world. These same-sex couples who already got married during this pandemic prove it!

Do you know of any other inspirational same-sex couples who already got married during this pandemic? Share below!