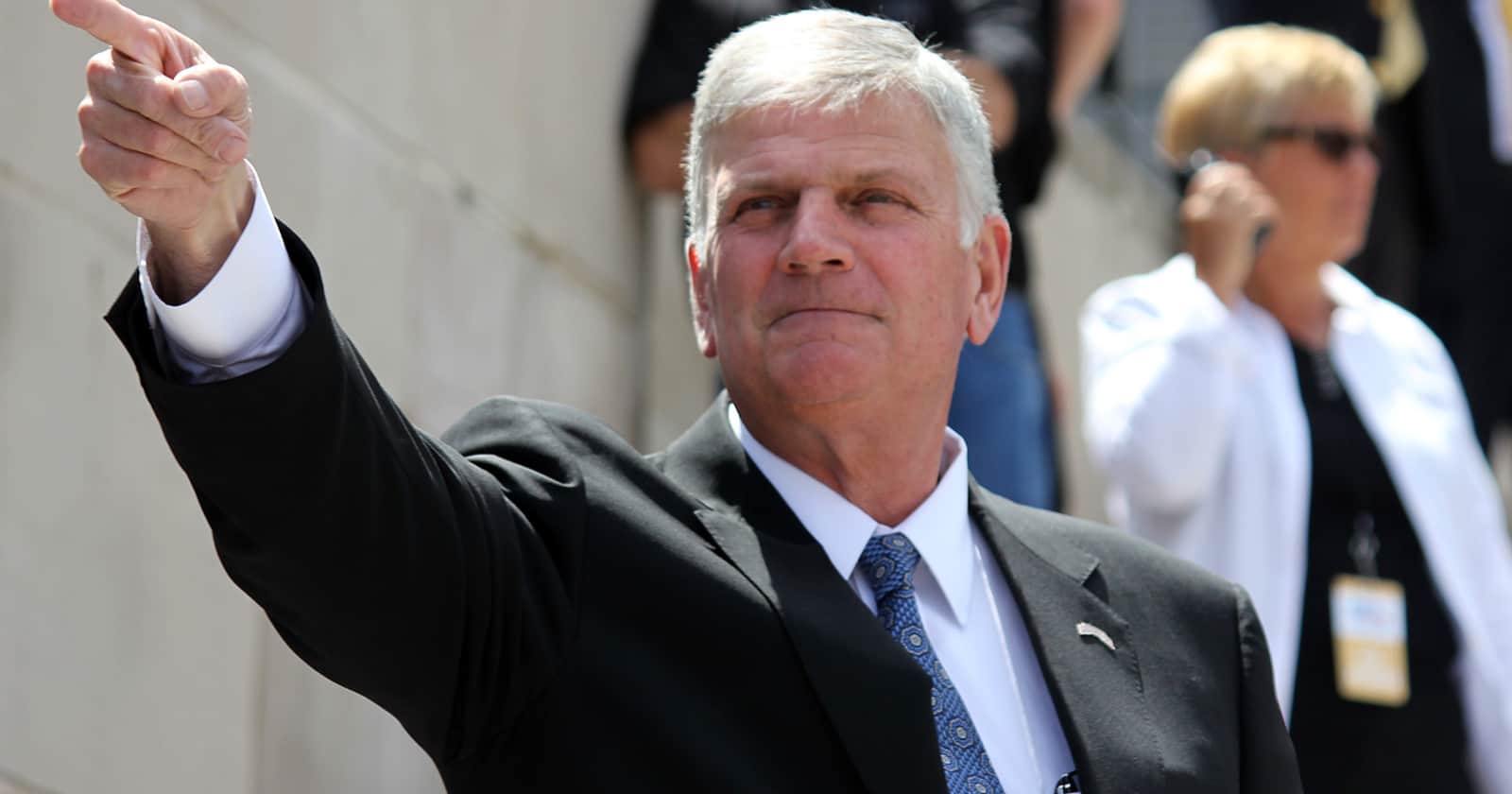 Franklin Graham, a staunch opponent of gay rights, spoke out in an AP interview last week, after New York told him to pack up his tent hospital and leave.

Table of Contents: hide
1) Franklin Graham Says “I Love Gay People” While Condemning Them to Hell
2) Samaritan’s Purse Treated With “Ingratitude”
3) The National Day Of Prayer

During his interview, Graham insisted that he loves gay people despite forcing volunteers to sign a belief statement condemning them to hell.

Much like his father, televangelist Billy Graham, Franklin Graham is no stranger to the spotlight.

Also like his deceased father, Franklin holds some strong anti-LGBTQ sentiments that he’s not afraid to voice. Yet, in his eyes, he’s not homophobic.

In a recent interview with the New York Times, he stated that “Just because I don’t agree doesn’t mean I’m against them.”

As the NYT points out, however, Graham has an interesting way of showing it.

[Franklin Graham] has compared same-sex marriage to polygamy and incest and opposed a bill banning anti-gay conversion therapy in 2017, calling homosexuality an “abomination.”

You’ll also recall the fact that their volunteers need to sign a “belief statement,” before they could begin working in his tent hospital.

Part of that statement includes swearing to a belief that gay people go to hell.

Ann Northrop, a member of the Reclaim Pride Coalition, who organized protests against the Samaritan’s Purse, believes that Graham made many New Yorkers feel “personally attacked and personally at risk.”

Of course, Graham and his supporters have something to say about that, too.

Jonathan S. Tobin, the editor in chief of Jewish News Syndicate, believes that the Demderocrats have been treating the Samaritan’s Purse with “ingratitude”, adding that.

Rather than welcome the group’s unselfish sacrifice, our local bigs greeted it with suspicion and hostility, thus treating the pandemic as one more culture-war battle line, rather than an opportunity to unite across the old divides.

Author Ron Sider, the author of “Rich Christians in an Age of Hunger” wrote a very long Facebook post, explaining why we must stay together and respect each other.

The National Day Of Prayer

In the interview with Eric Metaxas, Graham spoke about his views upon the gays and the world in general.

Metaxas believes that God is working through Graham, and he seems visibly upset about all the criticism on his actions.

It doesn’t make me anti-gay if I believe in God’s word. I love gay people. I want gay people to know that God loves gay people.

When Graham mentioned that many important people pitched in for the people in the hospital, he also mentioned Jimmy Fallon’s burger donations., as the host sarcastically added.

Jimmy Fallon is siding with bigots? It doesn’t make any sense.

Metaxas praises Graham for “speaking up everyone’s mind” and for having the courage to stand up to his beliefs.

When it came to the Bible, Graham stated that.

I read the Bible cover to cover. I don’t understand it all, but I believe it all.

The host asked Graham what his opinion is on the status of the nation and also, if God is speaking through the plague.

Apparently, according to them, “there’s nothing we can do, but pray,” because prayer is definitely more important than redirecting all our efforts into creating a vaccine.

In the end, Graham was asked to say a prayer for the nation, as the video was filmed on the National Day Of Prayer.

What do you think about Graham saying the he loves gay people despite forcing volunteers to sign a belief statement condemning them to hell? Share below.

Trudeau Statement on #IDAHAT : “Transphobia and Biphobia are never okay”